The 2016 will go down in the annals of American political history as highly unusual. A real estate mogul and reality television star winning the Republican nomination? A Vermont socialist even sniffing the Democratic nod? 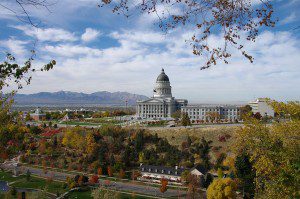 Voting blocs, however, are far more predictable. Pundits have written great length about Donald Trump’s weakness with Mormon voters. Not surprisingly, most Latter-day Saints are cool toward a candidate who brags about his affairs with married women. Trump also has little appeal for either libertarians or social conservatives, and a good number of Mormon voters fall into one of those two camps. Trump’s understanding of religious freedom does not line up well with the LDS Church’s teachings on the subject, and church leaders’ stance toward Muslim refugees is far more Merkel than Trump. Utah primary voters preferred the Ted to the Donald by a huge margin.

In light of Trump’s obvious shortcomings with Mormon voters, many columns have appeared in recent months suggesting that Utah (and its six electoral votes) are in play in 2016. Hillary Clinton certainly speaks more convincingly than Trump about her Christian faith. Might she pull off the equivalent of a Republican winning Massachusetts?

Forget it. One should never look to historians for political prognostication, but I feel very confident about my post from earlier this year predicting that evangelicals will overwhelmingly support Donald Trump against Hillary Clinton. Likewise, most Mormons are going to vote Trump as well. Utah is only in play if Clinton wins in a Reagan 1984, Nixon 1972, or LBJ 1964 landslide. Even in such circumstances, the deeply crimson Beehive State would likely only become a lighter shade of red.

My reasoning is twofold. First of all, while surveys of voter intentions last spring showed a close race in Utah, more recent polls give Trump a sizeable lead. This his true in both a one-on-one match against Clinton and in a broader race including Gary Johnson and Utah’s own Evan McMullin.

Second, whether or not people belong to an identifiable religious voting bloc, voting is very much a habit. There are relatively few true independents, i.e., individuals who vote regularly but with little regard for party. Most voters reliably circle in the bubble for the same party.

Trump is almost uniquely positioned to repel both Mormons and certain evangelical voters. And if the Republican Party nominated Trump clones for the next several presidential elections, many of those voters would go elsewhere.

One should not forget, however, just how reliable Republican Mormon voters have been. More reliably Republican than any other religious group. This does not mean that there are not hundreds of thousands of Latter-day Saints out there who lean toward the Democratic Party. It just means that those politically progressive Mormons are vastly outnumbered. This does not mean that this dynamic will not change in the future. But it does mean that it will not change anytime soon. For many decades, most Latter-day Saints, shaped by deep veins of anti-communism, social conservatism, and western libertarianism, have regarded the Democratic Party with deep suspicion.

There are reliably Democratic religious groups as well, namely the major African American Protestant denominations (and the Unitarian Universalists). They are more Democratic than Mormons are Republican. Even if the Democrats nominated the equivalent of a Blue Dog southerner, those Democratic-leaning groups are still going to overwhelmingly back their party’s candidate.

So, yes, Hillary Clinton might do a bit better with young evangelicals and Mormons than one might have expected, though not as well as Bernie Sanders would have done. In 2012, Romney carried Utah by nearly fifty points. That was unusual. McCain won the state by nearly thirty. I say Trump wins by twenty five.

August 31, 2016
The Space Between and the Migration of Identity
Next Post