“Let Me Be A Woman” Revised? Elisabeth Elliot and Beth Moore 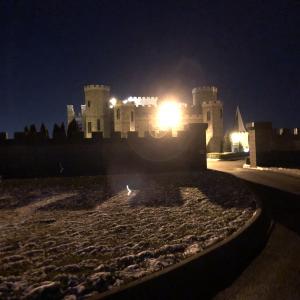 In Let Me Be A Woman, Elliot draws a clear line in the sand. Women are different from men, and women should stop trying to claim equality with men. Women’s submission is the divine order of the universe and it is time for women to embrace it.  As she writes: “It is a naive sort of feminism that insists that women prove their ability to do all the things that men do. This is a distortion and a travesty. Men have never sought to prove that they can do all the things women do. Why subject women to purely masculine criteria? Women can and ought to be judged by the criteria of femininity, for it is in their femininity that they participate in the human race. And femininity has its limitations. So has masculinity. That is what we’ve been talking about. To do this is not to do that. To be this is not to be that. To be a woman is not to be a man. To be married is not to be single – which may mean not to have a career. To marry this man is not to marry all the others. A choice is a limitation.”

Elliot’s words made quite a splash in conservative Christianity.  The paperback cover states that more than 250,000 copies are in print, which I think has now been greatly surpassed.  Elliot is quoted by John Piper and Wayne Grudem in Recovering Biblical Manhood and Womanhood, and I suspect her argument lies at the heart of their argument.  Let Me Be A Woman rates 4 1/2 stars on Christianbook.com , and Wikipedia cites a 1977 newspaper article claiming that Elliot’s use of the phrase “Let Me Be A Woman” at the National Woman’s Conference in Houston “evoked considerable applause.”

Rachel Held Evans rightly categorizes Elliot’s book as part of the first wave of evangelical complementarianism, “a movement that began as a reaction to second-wave feminism.”  She also quotes Elliot’s clear argument in Let Me Be A Woman–that women need to stay in their place. “This is a woman’s place and all of us need to know what our place is and to be put in it. The command of God puts us there where we belong.”

I was thinking a lot about Elisabeth Elliot this past week. On Monday I was privileged to give the Hinson Lectures at the Baptist Seminary of Kentucky. From eating fried derby pie, to walking in the snow 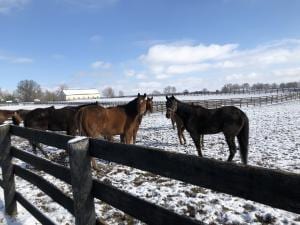 through a beautiful Lexington cemetery, to even seeing the Kentucky Castle (which for a medieval historian was really funny), I had a wonderful time. But it was also as sobering trip. I was smack in the middle of the Baptist battles which began in the late 1970s and culminated in the takeover of several Southern Baptist seminaries as well as the South 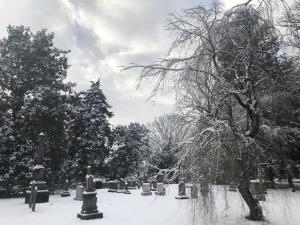 ern Baptist Convention. Just right up the road from Lexington is Southern Baptist Theological Seminary in Louisville, which was a major battle site in 1995. Then president Al Mohler fired Diana Garland, dean of the seminary’s Carver School of Social Work, for criticizing his leadership (Mohler’s refusal to hire a faculty member who supported women in ministry).  And this was only the beginning. Before it was all over at Southern Seminary,  a significant number of the faculty had resigned, including the forced resignation of Molly Marshall. One former faculty member described it to me as the day of the 25 firings. All of these faculty were quickly replaced by professors and pastors more in line with the conservative vision of Mohler. Also in Lousiville is the headquarters for the Council on Biblical Manhood and Womanhood. As I have discussed before, it was founded in 1987 for the purpose (essentially) of making Elliot’s vision for men and women a reality (although they credit, along with Elliot, the Bible as the source for their vision). As their website states, “The mission of The Council on Biblical Manhood and Womanhood is to set forth the teachings of the Bible about the complementary differences between men and women, created equally in the image of God, because these teachings are essential for obedience to Scripture and for the health of the family and the church.”

The CBMW declaration in 1987 echoes Elisabeth Elliot’s cry in 1976–just let me be a woman. 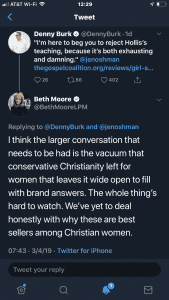 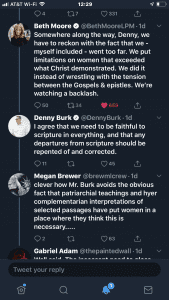 All of this was in the back of my mind yesterday when Chris Gehrz alerted me to a twitter conversation between Denny Burk and Beth Moore. Denny Burk tweeted a quote from Jen Oshman’s recent Gospel Coalition article to reject Rachel Hollis’s recent books which have exploded in popularity. (See Katelyn Beaty’s excellent review “Girl, Get Some Footnotes”). Burk tweeted (from Oshman), “I’m here to beg you to reject Hollis’s teaching, because it’s both exhausting and damning.” Beth Moore gave him an interesting response. “I think the larger conversation that needs to be had is the vacuum that conservative Christianity left for women that leaves it wide open to fill with brand answers. The whole thing’s hard to watch. We’ve yet to deal honestly with why these are best sellers among Christian women.”

Did you catch that? Beth Moore said the problem isn’t with Hollis; the problem lies with how conservative Christianity has failed women. Listen to how she continues.  “Somewhere along the way, Denny, we have to reckon with the fact that we–myself included–went too far. We put limitations on women that exceeded what Christ demonstrated. We did it instead of wrestling with the tension between the Gospels & epistles. We’re watching a backlash.”

Beth Moore knows scripture. She is a Bible teacher and has been her whole life. She realizes that there is a disconnect between how conservative evangelicalism has prescribed women’s roles and how Jesus taught and treated women. In her very gracious way, she opened the door for Denny Burk to consider that maybe he has been wrong about women. Since the 1970s, conservative Christians have been forcing women into a very small mold–gracious and submissive wife and mother who support and submit to their husband (with chaste singleness as a second best back up plan). But maybe there is more for women? Beth Moore seems to realize that there is. Yes, Jesus calls women to be wives and mothers who love and support their husbands (I do this myself!). But maybe his calling isn’t limited to this. Maybe he calls women to more?? Indeed, Beth Moore’s later tweet seems to indicate this. “Women,” she writes, “you may get called all sorts of things if you take Jesus at His word. Let them call you what they want so long as Christ can call you faithful.”

Praise God, Beth Moore. Let me be a woman, indeed–let me be FAITHFUL to God in whatever way he has called me.

I don’t think Denny Burk was really listening to her response. But Beth Moore continues to give me hope. 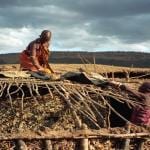 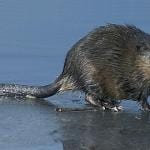 March 7, 2019 Muskrat Feasts and the Food Politics of Lent
Recent Comments
9 Comments | Leave a Comment
"What a great post, Allie! Insightful and eloquent."
Ansley Every Day People in Every Day ..."
"Impressive article. Provides the necessary perspective for entering into an informed discussion about the science/religion ..."
the old scribe Science, Religion, and Nineteenth Century Protestantism
"Very helpful! Thanks! It seems history has always been used as a weapon."
Roger McKinney Science, Religion, and Nineteenth Century Protestantism
"You have done nothing to refute my point. Certainly we should do the affirmative things ..."
NorrinRadd Ron Sider and the Fate of ..."
Browse Our Archives
Related posts from Anxious Bench