Something new happened on Christmas Eve in French Guiana: the launch of the James Webb Space Telescope. European, Canadian, and American agencies worked together on the project, collaboration that should appear a kind of gift in itself in a time of fragmentation, the New York Times reporting that program’s director exulted, “the world gave us this telescope and we’re handing it back to the world today.” This instrument, seeing farther across space and time than anything before it, is purposed to discover the earliest galaxies. That is, it strives to see what was in the beginning. Astronomers in their pajamas reportedly observed the launch from all around the globe, Carnegie Observatory’s Alan Dressler proclaiming, “Hallelujah!” in response to National Science Foundation’s Tod Lauer’s declaration: “Just enjoying the most sacred of all space words, ‘Nominal!'”

Rocket launchers apparently use that term, “nominal,” to signify that everything worked as planned. Therein so thrilling a launch at so symbolic a season begs the humanities to sing along with STEM in the chorus. Looking for the beginning seeks a Word, a name. Astronomers once again celebrate that in our present we might behold something that transformed our world long time ago.

One of the goods of Christmas is the chance it can give of stepping out of the quotidian into an eternal moment where the past presents itself as present. Advent is the beginning of the liturgical year, Christmas our routine entrance into something that is permanently something new. Time even seems to pause, the world holding still at the shock of the word became flesh. Around a crowded inn we may settle for a few days and exhale, dwelling in a mystery that we maybe understand slightly better than last year. This is why doing what is traditional feels right at Christmas. It is also why a complete break with the usual can feel right–let’s do the holidays in Quito!–and futhermore also why holidays are so hard after loss. Pain of loss comes not only in a beloved’s immediate absence from Christmas but in the holes revealed by memories of how things used to be.

At Christmas we are glad to rest in Kairos rather than Chronos. In the holy days, time does not stand still. But we have arrived at what is true no matter what happens along the edges, beholding something more beautiful than imagination promised.

But in fact the planet keeps spinning and the universe teems. Christmas may not be of the world but is still in it.

Astronomers exultant after the James Webb launch could settle in for long winter’s nap right after. Like other revelations, it is necessary to wait a while to see what happens next, to see what it all means. Astronomers assure that after a launch it’s best to hear nothing for about a month, no news is good news.

At nearly the same time earthlings launched a telescope, sixteen or so people died off the Greek coast when their boat foundered near Paros, migrants seeking better lives.

How contingent and perilous is life in ordinary time! Christmas promises of peace and rescue get swallowed up practically before they unfold. This happens yearly, in many ways great and small, but the 2004 Indian Ocean tsunami may be the worst. Early morning on Boxing Day an earthquake underwater thrust waves up to batter Indonesia. I don’t celebrate Boxing Day, so in Massachusetts it counted as Christmas, and as we watched a welcome, sparkling snow out the window, on screens we watched the sea consume the islands, smash boats and buildings, sweep away poor and rich, from local fishermen to island holidaygoers.

The better verses of Christmas carols tell of longing fulfilled. Our longing is at least partly proportionate to the pain of this earthly pilgrimage. “No more let sin and sorrows grow, nor thorns infest the ground”: that banishment is the condition of “Joy to the World,” and Emmanuel makes blessings flow “far as the curse is found.” “It Came upon a Midnight Clear” sings glad tidings o’er all this weary world, where we “beneath life’s crushing load, whose forms are bending low, who toil along the climbing way with painful steps and slow,” before it tells we sufferers, “look now! for glad and golden hours come swiftly on the wing. O rest beside the weary road and hear the angels sing.”

All the stuff that Christmas generates–boxes and bows and baubles–may be commercial and tacky but has some merit. The feast of the Incarnation is rightly observed with matter. The very materiality fortifies the walls that accommodate a few days’ behaving as though the rest of the world and the movement of time can do without us, and we outside of them. But that fortress isn’t very strong. The sea is all around, and space is all around that.

With the hymn writer, we might wonder, when shall peace fling its ancient splendors over all the weary world?

December 24, 2021
The Magi and the Cave of Treasures
Next Post 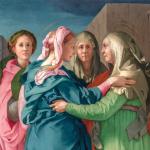 Evangelical
The Boy who Missed the Circus
Anxious Bench