The Boy who Missed the Circus

On July 6, 1944, exactly a month after the Allies’ D-day landing at Normandy, the circus arrived in Hartford, Connecticut. Six thousand or so locals flocked to the entertainment, war-weary and heat-dazed, ready for distraction. Around about the time trapeze artists started to dazzle the crowd, the band struck up “Stars and Stripes Forever”–a circus-staff cue that something was bad wrong.  The tent was on fire.

Animal cages blocked exits as attendees ran to escape. Some hacked their way through tent flaps wherever they could.  167 people lost lives in Hartford’s circus disaster. Investigation later theorized that a dropped cigarette started the fire, rather than suspected arson. Still, Ringling Brothers Barnum and Bailey was held responsible for the way its paraffin-and-gasoline coated tent and obstructed exits put patrons at risk.

The Hartford event must be counted among the country’s many tragedies. One artistic interpretation of it, though, deserves accounting among the most perceptive voices processing the way grief, relief, joy, and guilt weave persons together.  Mark Erelli’s “Hartfordtown 1944” tells what happened when the circus brought its worst.  The music is lively, upbeat in narrating something horrible–in this no strange combination to ears now. No beat is missed or key changed when delight gives way to terror at high flames whipping through the tent.

There were heroes who did their best

to help the children escape the flames

And the others, they managed to save themselves,

they survived but were never the same

Erelli’s lyrics not only report the event but enter reflections of a character who beholds it on our behalf.  Here the story of the fire is told by a boy, sunk in disappointment, because he sees the the circus coming and is not allowed to go. Envy tinges his longing. He is stuck at home because he was in trouble for something and his parents had grounded him.  He gets down on his knees first to beg, unsuccessfully, for circus permission, and then later for a different kind of plea.

They had grounded me, two weeks straight, now I can’t even remember why

But I know the first time I ever prayed was when I saw that black smoke in in the sky.

The war it was over in a year, I guess,

But the people in my town never cheered like the rest.

That insight, grief and relief together, is worth carrying away from a fire.  W.H. Auden mused in  “Musee des Beaux Arts,” a poem on a painting of Icarus falling from the sky, that somebody’s suffering happens while somebody else is not paying attention. What was disastrous for Icarus was not even “an important failure” for the person busy doing something else, “eating or opening a window or just walking dully along.” The point of “Hartford 1944” is not that good things come alongside bad ones, or that we all go through hard things, or that things have silver linings, or any other such assessments that cannot escape platitude.

Instead, Erelli’s interest is in the way private griefs or joys are nested within public ones, and the other way around too.  The nesting is not matryoshka-doll neat but more mosaic, glint seen from one angle darkened around a curve, the picture and the tessera competing for attention. The boy’s regret at missing the circus is set against others’ delight at attending it. The popular delight at attending the circus is set against the general suffering of the globe at war. The boy’s relief at being spared death by fire is set against the catastrophe for Hartford citizens who lost lives and loved ones. The grief of Hartford is set against Allied jubilation that war was over.

The isolation and belonging defining each of us make all stories complicated. Besides underscoring an approach to the study of history–generalizations distort, contingencies matter–Erelli presents a posture that contributes to a mature moral stance.  Kneeling, the boy has begun to rise into it.  The boy sees that what happens to us connects to the experience of others only partially but recursively.  We may learn to rejoice with those who rejoice and weep with those who weep even if our own circumstances set us not quite in their shoes.  That feels like an insight suitable for our own day.  Whatever this experience is for all of us, prolonged Covid and crises of many kinds,  is also at the same time quite different for each of us, surviving but never the same. 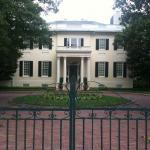 November 2, 2021 A Day to Vote for Democracy
Recent Comments
0 | Leave a Comment
Browse Our Archives
Related posts from Anxious Bench