Tampering with the Words of the Bible

It was interesting to see the quick backlash when Rep. Lauren Boebert tweeted that you cannot just rewrite the Constitution. Of course you can, and conservatives like Boebert are constantly emphasizing the 2nd Amendment which of course is by virtue of being an amendment a “rewrite.” But when a text comes to be regarded as sacred, as including a political document, people regard it as sacrosanct even as they live in ignorance and misconceptions regarding what it actually says.

One can make much the same points about the Bible. Indeed, I tackled this topic in my recent class on the Bible and music (the one with the empty classroom). The topic that day was “tampering with the text of the Bible.” I didn’t present it that way in the syllabus but that was the central focus. One option students have for a final project is to adapt words from the Bible to an existing melody, as historically has been done in the case of metrical Psalms. I know many students have fears related to trying to be musically creative. This allows them to focus on creating words to go with music rather than music to go with words. However, I know some students will be terrified of the notion of “tampering with the words of the Bible” and so will have different kinds of reservations about this option for their final project. This class aims to lay those concerns to rest.

I start very directly with the warning in the Book of Revelation that no one should add or remove words. I of course point out that the impression that refers to the whole Bible rather than the Book of Revelation results from placing it as the last book in the Bible. The act of making it scripture and choosing its placement altered its meaning! In discussing a translation that refers to the one who will be judged for doing these things using a masculine pronoun, I ask whether that means that women can add and remove words without consequences. If the masculine pronoun can be inclusive of all in a way that is not the case in English normally, could we translate it with “he or she” or is that tampering with the words of Revelation.

With the can of worms now open, we turn to the Gospels. They are written in Greek and yet Jesus spoke Aramaic. We thus have a translation of all but a few of his words. (This being a class on the Bible and music, there was of course a reference to ABBA.) Turning to the Lord’s Prayer, a text that many people know by heart, I suggest surely there the wording must be sacrosanct and unalterable. Yet there between Matthew and Luke we see different versions. Even among those who agree on using Matthew’s version one will hear debts in some churches and trespasses in others. (We also talked about “art” in “who art in heaven” and the way languages change over time so that preserving words precisely does not safeguard meaning.) There is also the final doxology, considered part of the prayer in most churches and yet not in our earliest manuscripts.

In addition to providing an opportunity to reassure students about an assignment, the class gives me a chance to relate the skills students are honing to very practical everyday concerns. Paraphrasing is something all successful students must be doing. If they are copying and pasting words into assignments and then changing a few they aren’t paraphrasing they are plagiarizing. They should be taking notes by summarizing and paraphrasing things they read and hear. This helps them process, comprehend, and recall material in a way that highlighting or copying and pasting does not. The skills we are working on are ones they already have, and should be using.

Students should perhaps have known already that paraphrasing the Bible is a legitimate activity. They have read children’s books which tell versions of Bible stories in simpler ways with many details left out. Different translations render the ideas in the biblical texts in different ways. Many of them have sung or at least heard songs that are based on the Bible yet with differences in wording. Their qualms aren’t because they haven’t encountered these things but because they have rarely if ever been asked to reflect on them. It is a privilege to have the occasion to do so in my class. The intersection of the Bible and music is a genuinely natural and helpful place to do so, and doing so leads not just to a more profound understanding of biblical music, but of the Bible itself in its own right.

The Message Over Precise Words

The Message Over the Words Part Two 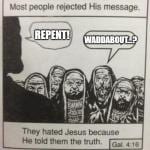 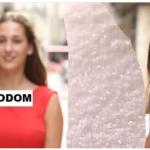 February 23, 2021 Penetrating the Meaning of Genesis 19
Recent Comments
0 | Leave a Comment
"That's kind of a weird coincidence but I was just commenting on the extraordinary claims ..."
John MacDonald Extraordinary Claims and Extraordinary Evidence
"I think it's Rudy Guiliani (seen here https://www.youtube.com/wat... interacting with a famous friend of Jeffrey ..."
Choose Wisely Kirk Cameron at the Indianapolis Public ..."
"I just did a blog post that, in part, argues for a late date of ..."
John MacDonald Rethinking the Dates of the New ..."
"Thank you Professor McGrath!! What has happened at so many universities in the U.S. and ..."
Daniel Wilcox The Freedom to Be Offended and ..."
Browse Our Archives
Related posts from Religion Prof: The Blog of James F. McGrath