Is the Oldest Christology also the Highest?

Some view Galatians as the oldest piece of Christian literature we have. And at the very beginning of that letter, Paul contrasts human authorities with God and Jesus. 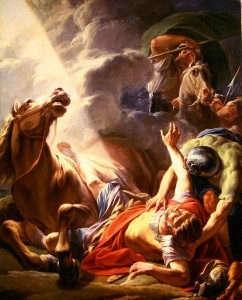 And so, he asks, is this – arguably the oldest Christological statement in the New Testament – also the highest – i.e. one that makes a contrast between humans and divine beings, and places Jesus on the divine side of things.

The problem with this interpretation is that Paul elsewhere makes clear that he does not think that Jesus is not a human being, which is what the contrast in Galatians 1:1 says when taken literally at face value.

And so one has to view Paul as speaking in an imprecise manner either here or in all the places where he refers to Jesus as a human being.

If we accept the former as more likely, we can make good sense of Paul's point even if his wording goes beyond what he ought to have said while making that point if he wanted to avoid contradicting himself.

Paul is clearly concerned in his letter to emphasize that he does not depend on the authority of the apostles in Jerusalem, or anyone else on Earth, for his calling and his authority.

And so Paul says that he is not an apostle from or through human beings (i.e. not merely an emissary of some other person or community), but through Jesus Christ and God the Father (i.e. by means of the authority of Jesus Christ, the only human being thus far whom God raised from the dead, and is thus the one trustworthy source of divine authority, in contrast with even the apostles that Jesus sent, as those figures place one a further step removed from God's direct activity and communication).

Paul is thus, it seems to me, concerned to place himself on the same level as those commissioned directly by Jesus, rather than subordinate to and dependent upon their authority. He is not trying to place Jesus outside of the human sphere.

What do readers of this blog think?

Elsewhere in the blogosphere, Bart Ehrman blogged recently about adoptionistic Christologies. Daniel Kirk spoke about the human Jesus. And Joel Watts shared a video about whether Jesus is God in the Gospel of Mark.