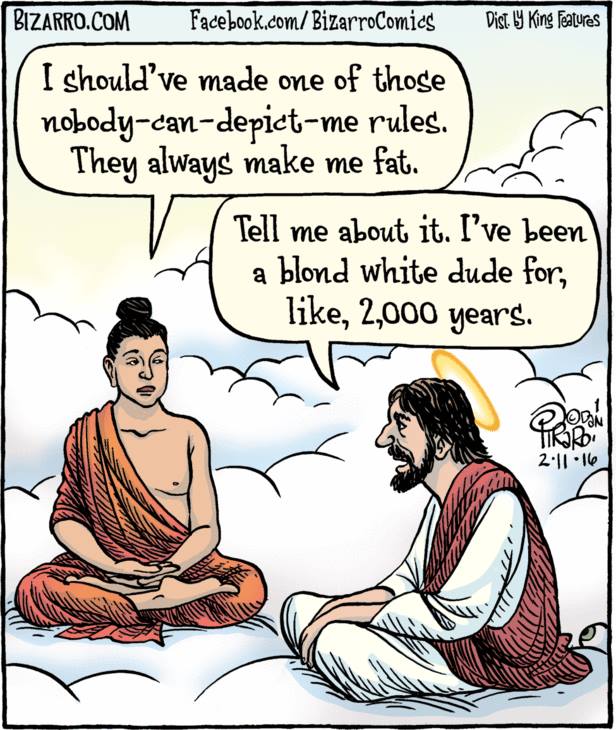 Today’s Bizarro cartoon takes a look at how we depict important figures. What do you think about this topic when considered in a more serious way? How has the openness of Buddhists and Christians to depicting the key figures in their traditions impacted the way people think about them? Has the prohibition against depicting Muhammad helped safeguard his humanness as a historical figure, or simply led to a different sort of reverence?

February 12, 2016 Side Effects of Your Theology
Recent Comments
8 Comments | Leave a Comment
"Intriguingly enough, since you mentioned "No one has suggested that Jesus was merely a carbon ..."
Chris H #JohnTheBaptist Enoch Seminar Nangeroni Meeting Day ..."
"Bestest post,..... My daughter who is incapable of being on the internet due to genetics ..."
davidt Evil In the Youth Group
"From my perspective this comes from a really problematic tendency in neo-liberal thinking to promote ..."
Chris H Jesus Wasn’t Unique
"It definitely seems memeworthy to me!https://uploads.disquscdn.c..."
James F. McGrath Evangelicals, Objective Truth, and the MSM
Browse Our Archives
get the latest from
Religion Prof: The Blog of James F. McGrath
Sign up for our newsletter
Books by This Author Books by James F. McGrath