The Continuing Adventures of Space Jesus

Richard Carrier is clearly scraping the bottom of the apologetics barrel once again. In his most recent post, he starts off by insisting that I am badly wrong – for making a point that he himself agrees with, but which I made in words that he decides to interpret in an unnecessarily narrow and frankly uncharitable way. When I said in a blog post that rulers and nobles made inscriptions, and that there is no reason therefore that we ought to expect an inscription by or about Jesus from his own time, could anyone be in any doubt that my point was that inscriptions were typically made by the wealthy and powerful and not the poor and ordinary? Obviously if one includes graffiti and scratchings onto ossuaries in the category of “inscriptions” then people of a wide range of social classes made “inscriptions.” If I wanted to play Carrier's childish game, I could say that he is wrong to suggest that poverty might explain why the earliest Christians did not leave us inscriptions. But if I were to engage in such behavior, I would sacrifice my credibility, at least in the eyes of those who know what rational discourse and academic decorum are supposed to look like. The truth is that we do not have inscriptions of any sort that we can confidently connect with the first generation of Christians. But we are aware from texts that there was a first generation of Christians. And so debating inscriptions as though it were proof of Jesus' historicity or ahistoricity is apologetics of a sort that wants to score points with those who do not actually care about doing justice to the evidence in a nuanced historical fashion.

When commenting on mythicism or creationism, one must accept the fact that promoters of fringe pseudoscholarship are likely to find ways of interpreting your words in an uncharitable manner, one that would never occur to someone who is not desperately reading your words precisely in the hope of finding cheap apologetics points to score, precisely because they are unable to mount a serious substantive case about the things that really matter. Of course, in the same post, Carrier calls such comparisons between mythicists and creationists a mere poisoning of the well. But it isn't poisoning the well to make a comparison that is apt. And if it were, then surely all his comparisons, even assuming they were apt, would be at very thing. In the post in question, he shows that he failed to grasp the point of one of my remarks about something that some mythicists have in common with creationists. The latter often say that, since Paul compares Adam and Christ, if the former is deemed mythical, then what is stopping you from viewing the latter in the same way? I have had mythicists say the same thing, as though young-earth creationist logic were sound. Indeed, they often don't care to stick with the question of the inner logic of Paul's arguments, but are happy to say that if Batman can by fictional, why not Jesus? There is no “logic” whatsoever to that “argument,” since one could substitute absolutely any name instead of Jesus' and doing so would not render the person in question ahistorical.

Carrier also gave an answer to a question I asked on my blog a while back about other references to a celestial human that might correspond to what mythicists think Paul meant. And if it had come from someone interested in serious discussion of the evidence, an interesting conversation might have ensued. Alas, Carrier's typical bluster precludes all hope of that. Philo's “heavenly man” is not purely celestial in the sense that the mythicist Jesus is supposed to have been. For Philo the first human of Genesis 1 is an ideal form, the pattern of which the material human made in Genesis 2 is a copy. And as such, he is incorruptable and not susceptible to death and decay. It would be great to have a serious conversation with mythicists about the clear differences between Paul's heavenly man and Philo's, a topic which scholars have written about for generations. But first I need to find a mythicist who is actually interested in serious conversation.

I should probably not even mention Carrier's posts in the future, given their tone as well as their content, and that they offer nothing that requires or deserves a response. I am sure that anyone who reads this blog and who also read his post could have worked out for themselves all the points that I made in this post. It is always hard to know how to best respond to apologetics. As anyone who has dealt with antievolutionists and oher denialists will know all too well, it seems like a no-win situation. Say nothing, and you leave the internet to their voices. Respond, and it may make them look like they have said something worthy of a response by a professional expert. But then again, I don't have to worry about that latter in the case of Carrier. Since he considers every professional scholar who agrees with him to be incompetent or insane if not both, my mentioning him can't possibly enhance his credibility in the eyes of his readership.

But I will give Carrier this: he apparently knows how to make a good poster, as the image below demonstrates. But I do not expect his show The Amazing Adventures of Space Jesus to get renewed for another season. Despite what mythicists will tell you, their show is already a tired rerun whose ratings have not improved in the past century, at least among academics. 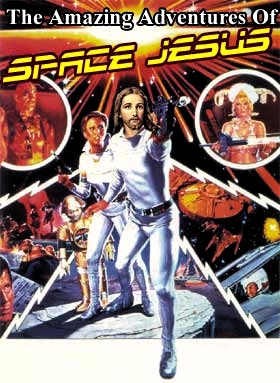 February 13, 2016
First Review of Touching the Face of the Cosmos
Next Post