What the Bible Says 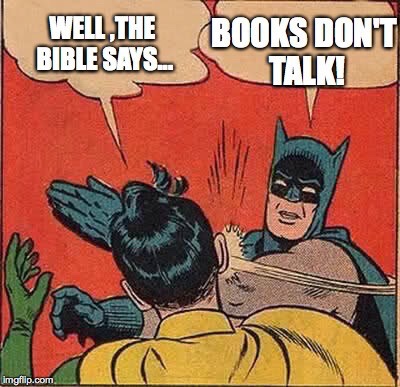 One of my first posts on this blog, after it moved from its original self-hosted location to Blogger back in 2007, was on this topic. Here is what I wrote:

This is just a short entry, just to share a further illustration of how the Bible is mythologized, personalized and in some cases deified by well-meaning but misguided Christians. I received a message from someone who disagreed with an answer of mine on Yahoo! Answers, and this individual said he isn’t interested in what I think but “what the Bible thinks”.

The Bible isn’t a person, and even treating it as though it is a single work is misleading. One of the biggest difficulties a “Bible only” approach to Christianity must face is that the Bible was put together, by Jews and Christians, and unless one regards the decisions of those who put the canon(s) together as infallible, then claims to have an infallible Bible become problematic. Add to this the fallible copying process, and the situation becomes all the more complex.

Those who focus such attention on the Bible mean well, and think they are glorifying God. To some of us, however, it seems that they are leaving the mystery of God completely to one side for the supposed certainty the more accessible Bible can give. It is the same sort of thing the Israelites are said to have done at Mt. Sinai – the inaccessible and mysterious God and Moses who had not been heard from were left to one side, and the golden calf substituted in their place. The Bible has become the golden calf of many Christians in our time. How ironic!

February 9, 2016
Left Behind and Right Wing Conspiracy Theories
Next Post

February 10, 2016 Same Scripture Different Response
Recent Comments
3 Comments | Leave a Comment
Browse Our Archives
get the latest from
Religion Prof: The Blog of James F. McGrath
Sign up for our newsletter
POPULAR AT PATHEOS Progressive Christian
1