Last night’s episode of The X-Files was the finale of the current mini-series, yet it ended on a cliffhanger which left us with the hope that there will be more. The episode left me feeling as though I was finally getting a sense of the big picture of what The X-Files had been about from the very beginning, even though we had not always glimpsed it clearly. A conspiracy to take hold of the reigns of power and control vast populations of people through the use of technology and a range of means of manipulation, some subtle and some less so.

As you may have guessed, I am not talking about the story in the world of The X-Files, but about the show itself. As a FOX program, with a main character whose name is Fox, I should not have been at all surprised when the show’s true colors became apparent to me as I watched the episode. Indeed, I wondered how I could have failed to see it sooner. Chemtrails. Dangerous and deadly things added to vaccinations. Anthrax. Secret cabals. The show is about the fringe conspiracy theorists being right. It is true that all along we have been uncertain what exactly they were right about. Was the government harnessing alien technology? Or was the government pretending that it was covering up the truth about aliens so that it could abduct people themselves? Or was it a bit of both? It doesn’t matter. The ultimate aim is to get people to believe that the government has become too powerful to be trusted, that it is working against us rather than for us, so that we choose to trust and vote for those voices who claim that they will make government less intrusive, even though it should be clear that those voices in fact are aligned with very powerful and wealthy individuals and support their interests.

And so The X-Files is both about conspiracies, and a contributor to them.

For those interested in religious themes, the discussion with the Cigarette-Smoking Man about playing God was noteworthy. He mentioned making the world in his own image rather than God’s, and when accused of playing God, he hinted that he was rather playing the Devil. But his aim (if there is anything he said that can be trusted, which is a big “if”) is to make a new world for a select group, rather than let human-made cataclysm destroy us all or at best leave the matter of who survives up to chance. The title of the episode also hints in a not at all subtle fashion at another comparison that could be made. There are interesting echoes of the MaddAddam trilogy by Margaret Atwood, and it was also interesting that the CSM affirmed human-caused climate change, which many conspiracy theorists reject.

It was interesting to watch this episode, which depicted massive outbreaks of illness ultimately triggered by something placed in vaccines a long time earlier, at a time when there is a mumps outbreak on my university campus, with all the students who’ve come down with the disease having received the MMR vaccine as children, and everyone being advised to get a booster shot. This is precisely the sort of thing that would confirm one’s suspicions, if one were inclined to believe that we are being used for experimentation by dark forces.

What did you think of last night’s X-Files season finale? Are you looking forward to more?

February 24, 2016 10th Level Apologist
Recent Comments
1 Comment | Leave a Comment
"Well, now I want to write a book called QAnon in the Bible about the ..."
Phil Ledgerwood Warning Labels for Christianity?
"Are you suggesting that there hasn't been a particular widespread bigotry towards blacks among whites ..."
James F. McGrath At What Point Repentance?
"Thanks for that Conspiracy Theory article link - it articulates the argument well about the ..."
Scurra Warning Labels for Christianity?
"Self-reflection is a good thing. You should try it. "I am not surprised that a ..."
Cat At What Point Repentance?
Browse Our Archives
get the latest from
Religion Prof: The Blog of James F. McGrath
Sign up for our newsletter
POPULAR AT PATHEOS Progressive Christian
1 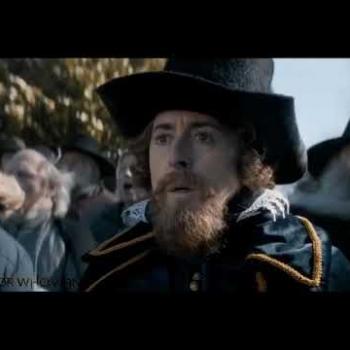