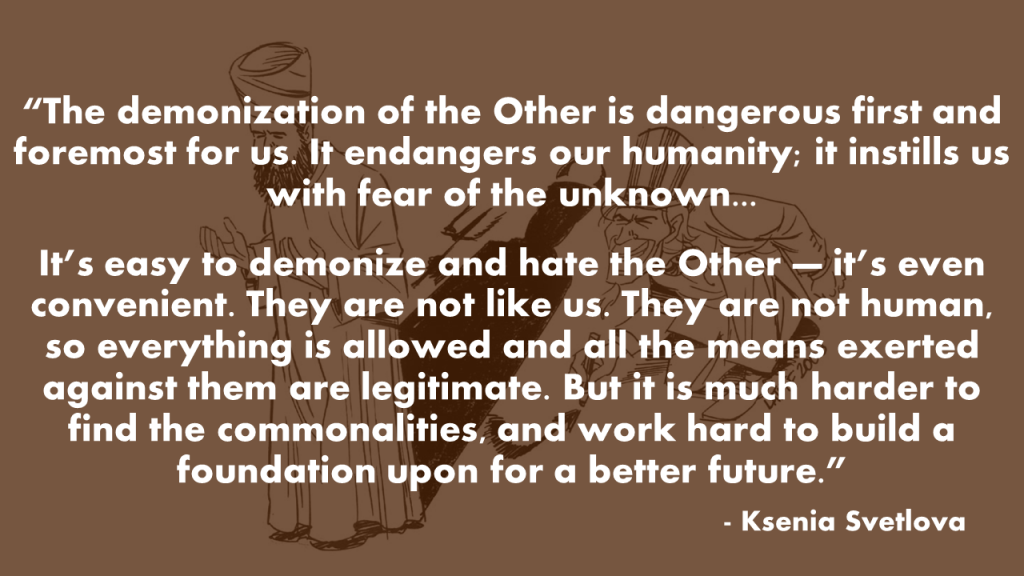 Here is a larger excerpt from the online article that the above quote comes from:

The demonization of the Other is dangerous first and foremost for us. It endangers our humanity; it instills us with fear of the unknown. After all, they are different from us, they operate according to different and unfamiliar codes. This demonization is dangerous because it affects our choices and our worldview.When it comes to realpolitik, the incitement and the funerals for terrorists are not a consideration. After all, we made peace agreements with Jordan and Egypt — where there is no shortage of incitement, prejudice and hatred for us. If we dream not only about a resolution and the defining of borders (and this is barely dreamed about), but also of a genuine reconciliation process, like in Rwanda, Liberia or Northern Ireland, one that will really put an end to the bloodshed, then we must drop our biases and predispositions and recognize that people are always people.It’s easy to demonize and hate the Other — it’s even convenient. They are not like us. They are not human, so everything is allowed and all the means exerted against them are legitimate. But it is much harder to find the commonalities, and work hard to build a foundation upon for a better future.

Click through to read the rest. See also Russell McCutcheon's post with a religious studies perspective on Trump rallies, and Josh Way on the tendency to use Revelation to denounce others without hearing its criticism of us. Here is an excerpt:

This is the dreaded beast of Revelation: imperial consumerism that lulls people into working and buying and selling and worshiping against their own interests. Revelation wasn’t a warning to the future about the rise of a bad guy from an enemy camp, it was a clarion call to first century Christians about capitulation and collusions with the powers-that-be. It was an anti-establishment screed. In a bottomless pit of irony, those Christian gatekeepers who most loudly sound the “antichrist” alarm in our own day tend to be those who are most sold out to nationalism, capitalism, and the established imperial order.

In context, the monsters of Revelation confront us with an unexpected threat. It’s easy to exploit strange old prophecies for personal gain, fear mongering, and drumming up the donor base. It’s easy to demonize some foreign enemy who threatens to crush our freedom and lifestyle. It’s quite another thing to imagine that our very way of life might have all the markings of a beast.