Do No Harm Act

Via the blog Joe My God, I learned about an effort to amend the federal Religious Freedom Restoration Act, called the “Do No Harm” Act. Here is a quote from the press release:

The Do No Harm Act would clarify that no one can seek religious exemption from laws guaranteeing fundamental civil and legal rights. It comes in response to continued efforts across the country to cite religious belief as grounds to undermine Civil Rights Act protections, limit access to healthcare, and refuse service to minority populations.

Specifically, the Do No Harm Act would limit the use of RFRA in cases involving discrimination, child labor and abuse, wages and collective bargaining, access to health care, public accommodations, and social services provided through government contract.

“When Congress passed RFRA in 1993, the goal was to protect religious freedom for minority groups by requiring the government to demonstrate a compelling interest and to use a policy that was the least restrictive means,” said Congressman Bobby Scott. “Since then, the law has been misconstrued as allowing the sincerely-held religious beliefs of one person to trump the civil rights of others. Civil rights are a compelling government interest, and we cannot allow so-called ‘religious freedom,’ ‘religious liberty’ or ‘faith-based initiatives’ to invalidate the very laws designed to correct the generations of injustices inflicted on minorities. The Do No Harm Act restores the original intent of RFRA.”

“The right of Americans to freely and fully express our faith is sacred in this country,” said Congressman Joe Kennedy III. “But in order to guarantee that liberty for every citizen, our system must ensure that my religious freedom does not infringe on yours or do you harm. While not its original intent, the Religious Freedom Restoration Act has become a vehicle for those seeking to impose their beliefs on others or claim that the tenants of their faith justify discrimination. The Do No Harm Act will restore the balance between our right to religious freedom and our promise of equal protection under law.”

Click through to read the full text of the bill. 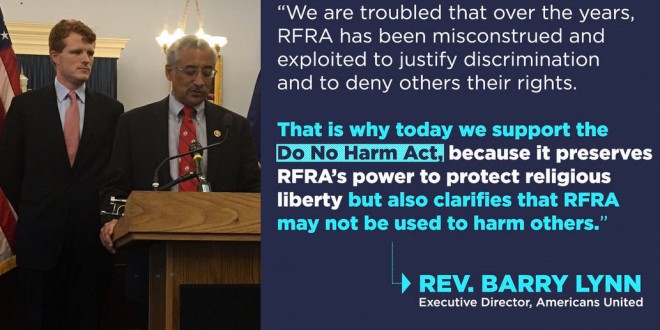 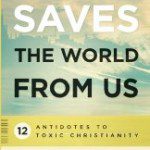 May 19, 2016 How Jesus Saves the World From Us
Recent Comments
0 | Leave a Comment
Browse Our Archives
get the latest from
Religion Prof: The Blog of James F. McGrath
Sign up for our newsletter
POPULAR AT PATHEOS Progressive Christian
1