How Jesus Saves the World From Us

I am delighted to have the privilege of participating in a blog tour about fellow Patheos blogger Morgan Guyton’s book, How Jesus Saves the World from Us: 12 Antidotes to Toxic Christianity. Throughout the history of ancient Israel and of Christianity, there have been voices that have had an impact through their combination of humility, insight, confidence, relevance, and eloquence. We think of them as prophetic figures, but they haven’t been lone voices. They have just said what needed to be said, and what many were saying, in a manner that was not timelessly perfect, but was just right for that particular historical moment. And so it is precisely because Morgan Guyton combines legitimate criticisms of megachurches (to give one example from pp.147-8) with a recognition that part of his dislike is envy, wishing that he could be charismatic or funny enough to do what rock star megachurch pastors, that makes what he writes so compelling and powerful.

The main theme of the book is articulated in the opening question, “Have Christians become what Jesus came to stop us from being?” The title of the book alludes to the exploration of that theme in connection with the life of Saul of Tarsus. What God did by changing Saul’s direction was less about Paul “getting saved,” and more about saving the victims of his persecution from him (p.3).

It is these unconventional and insightful perspectives on familiar Biblical stories, and on contemporary theological ideas and church practices, that unite the disparate analogies and metaphors running through the book’s chapters, each of which is built around a contrast between something that at least some Christians tend to do or to understand, and another way of approaching things. These points are regularly articulated by way of relevant illustrations from contemporary life. For instance, in the chapter contrasting worship with performance, Guyton writes (p.17):

Too many Christians believe that we have to justify ourselves by putting on a convincing performance of “faith” for a Simon Cowell God who needs to be persuaded by our performance not to send us to hell. This delusion straightjackets them into a life of pious posturing that makes them toxic to other people. God unilaterally justifies us “by his grace as a gift.” We are not saved from God’s disapproval. We are saved from the self-isolation of believing the serpent’s lie and hiding in the bushes from God. Faith isn’t the performance that passes God’s test to earn us a ticket to heaven; it’s the abolition of performance that liberates us from the hell of self-justification and restores us to a life of authentic worship.

The book is full of such quotable passages, which I plan to turn into memes if others don’t beat me to it. Indeed, I could easily have quoted another passage from the same chapter as illustrating the important points made in memorable fashion (p.16):

It isn’t enough to change the audience for our performance from the world to God (which many Christians think we’re supposed to do). As long as we think we’re living “under the critic,” whether it’s the world or God himself, we will perform instead of worship.

A similar point emerges in a chapter contrasting honor with terror in relation to the fear of God, as Guyton compares Matthew 25:14-30 to an ancient episode of The Apprentice (p.59).

I especially appreciated Guyton’s analogies from music, ranging from breathing that we are taught when we take singing lessons, to jamming the blues. Playing the blues is ruined by people who will stop a song because someone isn’t “getting it right,” and it is ruined by those who want to solo all the time. Theology, Guyton suggests, should be about learning the progressions and how to enjoy exploring the possibilities around them, rather than rigidly defining what the “perfect” song should be, in a manner that only a few if any might be able to play correctly, since “it’s impossible to play God’s song perfectly” (p.83). Heresy, in its meaning in Titus (which Guyton treats as written by Paul), is about causing divisions and not by holding the wrong views.

The chapter on solidarity as opposed to sanctimony is especially powerful, calling on us to become “perfectly loving, rather than the perfect rule enforcers” (p.109). Like the climactic emergence to prominence of a theme that has been woven through a piece of music from early on, chapter 9 depicts Jesus’ solidarity with sinners, as he defends women who may not have acted wisely or appropriately, but whose actions are nonetheless preferable to those of their critics (pp.113-114). So too the following chapter on insiders and outsiders highlights how different the message of the cross seems to those who live today fearing the equivalent of crucifixion. The cross has “become jewelry that cannot symbolize our loss of status because it is now a status symbol” (p.124). And again, “It makes sense for people who are not being crucified to reduce Jesus’ cross into an abstract spiritual transaction, but for people who are being crucified, Jesus’ cross proves his solidarity with their suffering” (p.126). In exploring this topic, Guyton is not unaware of his own privileges as a white male, nor of his own shortcomings when it comes to Jesus’ challenging teachings. As he puts it with characteristic frankness, “I’m not sure he’ll be happy with me if I blow off his parable on account of his grace” (p.128). Guyton seeks to avoid allowing the Gospel of grace as many understand it to be used to neutralize the challenge of Jesus’ call to take up our cross, to join the outsiders at the table. This chapter includes (as do all of them) personal experiences that illustrate the kinds of things that Christianity can be in our time at its best and not just at its worst. After describing the transforming impact of a community of Christians marginalized because of the sexual orientation of most members, Guyton writes (p.130):

LGBTQ people have become scapegoats for many insider Christians who were looking for a way to feel like the world’s scapegoats. Just because our culture has started to shift into accepting queer identity doesn’t mean that we can obfuscate our way our of Jesus’ call to radically renounce worldly privilege by using the gay issue to solicit “persecution” from “the world.”

The entire book is in essence a proclamation of the good news, the gospel not of how to experience an individualistic salvation that assures you of your own rightness and sanctity, but a gospel of how to be saved from precisely that “toxic understanding of salvation” (p.158). Perhaps the most important thing to say is that, for those who may be inclined to cheer and shout amens in response to these points, Guyton recognizes that Jesus didn’t just hobnob with the marginalized, but also with the powerful, and that progressive Christians likewise need to learn how not to unfriend those who have the opportunity to interact in the manner that Jesus did with those that are in fact precisely the kind of people that Jesus criticized. There is a real danger for those who recognize the problems with sanctimony, for instance, to simply develop yet another kind of self-righteousness about our supposed avoidance of it.

It is precisely the recognition both of major problems facing churches in our time, as well as pitfalls that lie in wait for those who recognize the problems, that makes Guyton’s book so important. I hope that How Jesus Saves the World from Us will be widely read, quoted, and discussed. And to facilitate that, each chapter ends with discussion questions. I conclude my review with one of them (p.68): “Have you ever had a Huck Finn moment when what you knew was right went completely against the grain of your community?” 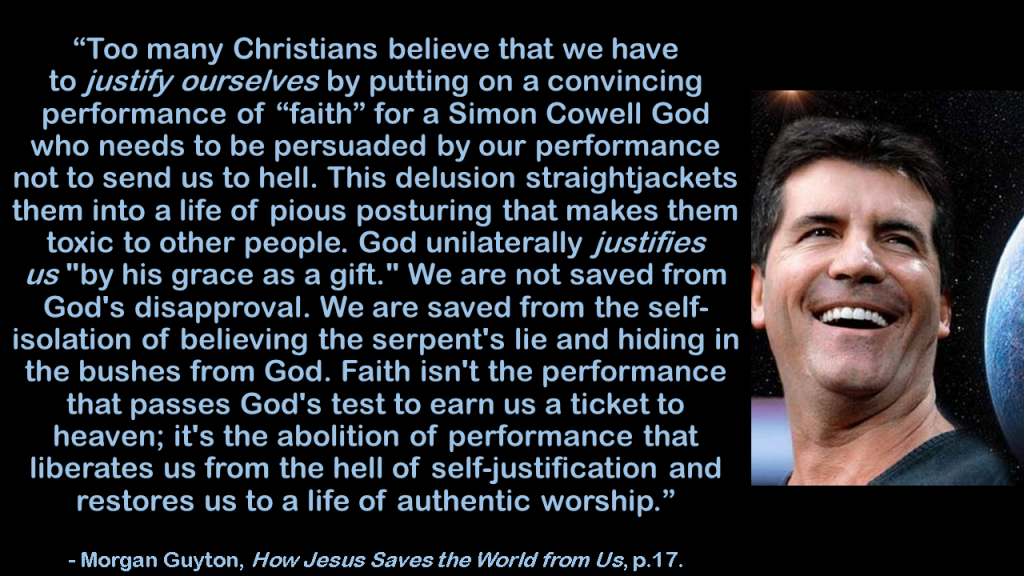 May 19, 2016 Student-Made Documentary on the Gospel of Judas
Recent Comments
2 Comments | Leave a Comment
Browse Our Archives
get the latest from
Religion Prof: The Blog of James F. McGrath
Sign up for our newsletter
POPULAR AT PATHEOS Progressive Christian
1