Fantastic Fan Cultures and the Sacred

Call for Submissions for an anthology volume: Fantastic Fan Cultures and the Sacred

They ways in which people pursue religion has changed in America and the West. Traditional, institutional religions are in decline, and even among those who claim “None” as their identity, an individualized spirituality of seeking is growing in popularity. As a part of this quest, the sacred often comes in seemingly nonreligious forms. Gary Laderman, a scholar of religion asks in light of this situation:

“So what if the sacred is not only, or even primarily, tied to theology or religious identity labels like more, less, and not religious? We might see how religious practices and commitments emanate from unlikely sources today…”

One of those unlike sources of the sacred is fantastic fan cultures. Science fiction, fantasy, and horror genres are incredibly popular and have become multimillion dollar facets of the entertainment industry. But there is more here than meets the eye. Fantastic fandom has also spawned subcultures that include sacred aspects.

Fantastic Fan Cultures and the Sacred will be an edited anthology that explores the sacred aspects of fantastic fandom.  Its content will be academically informed, but accessible to average readers so that it appeals not only to scholars who wanting to learn more about pop culture and religion, but also to average fans who will expand their understanding of their fandom and culture.

Possible topics for this volume include but are not limited to:

This volume will be edited by John Morehead. Morehead is the proprietor ofTheoFantastique.com. He has contributed to various online and print publications including Cinefantastique Online, the Journal of the Fantastic in the Arts, and Extrapolation. In addition, he is the co-editor of The Undead and Theology, Joss Whedon and Religion, and the editor ofThe Supernatural Cinema of Guillermo del Toro.

Those interested in being a part of this volume are encouraged to send a 300 word proposal and your curriculum vitae by email. Both should be in MSWord or PDF format. The deadline for submission is September 2, 2016. Materials and questions should be sent to John Morehead at johnwmorehead@msn.com. 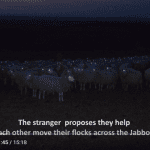 July 23, 2016
Jacob and the Angel for Piano and Orchestra
Next Post

July 24, 2016 Should You Be Making Games?
Recent Comments
1 Comment | Leave a Comment
Browse Our Archives
get the latest from
Religion Prof: The Blog of James F. McGrath
Sign up for our newsletter
POPULAR AT PATHEOS Progressive Christian
1