I have had comments on things I have posted on the blog and on Facebook, from commenters whom I don’t know and who’ve never to my knowledge posted on my blog or Facebook wall before. One was addressing the control of knowledge by the 1% to promote evolution and deny the truth about human origins. Others were claiming that the truth could be found in a study published in the Washington Post, but not by reading that article – instead, you had to read a conservative website’s reinterpretation of that article and the data in it.

In both cases, the claim is on one level essentially the same. The truth is there to be seen; those who did the research are part of a conspiracy to cover up the truth; and yet what they published publicly nonetheless gives people with insight everything they need to see through the conspiracy to the truth.

The truth is that we don’t have access to bare, uninterpreted facts, and that “scientific studies prove” that scientific studies don’t “prove” anything. It has been ironic to have someone who apparently has no idea who I am nonetheless comment on my Facebook wall, misconstrue what I am saying, and insist that they have forgotten more about what they learned about epistemology than I have ever known.

What interests me most is why they would assert that when they apparently have no idea who I am or that I even have an academic background, never mind what it is in. It illustrates that even (and sometimes especially) educated people can engage in motivated reasoning. The individual in question clearly has a deeply vested interest in avoiding the conclusion that racism could in any way be a factor in the numbers of unarmed black males who are shot by police. But why would someone care so much that they would engage in that difficult and if not impossible task of making that case? What makes that more appealing than the no less arduous task of revising your worldview to include the fact that racism plays a role in our society?

I suspect that one major factor is communal. Individuals would presumably have less vested interest in denying evolution or racism if doing so would not impact their acceptance in communities of which they are a part.

But no scientific study can prove that that is what is going on.

Nevertheless, there are studies and perspectives which, if people are open to them, can help us to see what is going on, as long as we are willing to apply it to our own reasoning and not just that of others with whom we are already inclined to disagree. For instance, Connor Wood had a great post a while back about dogmatic atheism and religious fundamentalism, which included this flow chart that depicts what we find in both: 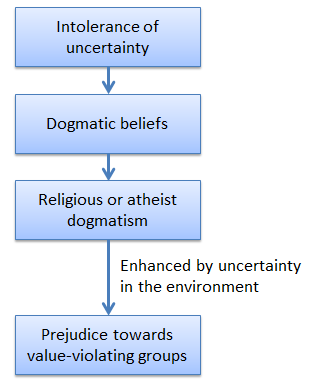 See also Pascal-Emmanuel Gobry’s piece on why fundamentalism is a state of mind. I disagree with him, however, that fundamentalism involves a refusal to think. It takes much greater mental effort, and sometimes impressive feats of mental gymnastics, to be a fundamentalist. But is it just our own tendency to be impressed with those mental accomplishments that explains why we prefer dogmatic denialism to the acceptance of information offered by mainstream science and other such sources?

See too Jonny Scaramanga’s honest post recognizing that he is still a fundamentalist at heart. 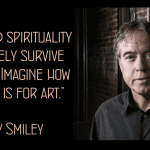 July 11, 2016 Hostile to Art?
Recent Comments
136 Comments | Leave a Comment
"Bestest post,..... My daughter who is incapable of being on the internet due to genetics ..."
davidt Evil In the Youth Group
"From my perspective this comes from a really problematic tendency in neo-liberal thinking to promote ..."
Chris H Jesus Wasn’t Unique
"It definitely seems memeworthy to me!https://uploads.disquscdn.c..."
James F. McGrath Evangelicals, Objective Truth, and the MSM
"Thanks for asking - if it helps, go for it :)"
Douglas Underhill Evangelicals, Objective Truth, and the MSM
Browse Our Archives
get the latest from
Religion Prof: The Blog of James F. McGrath
Sign up for our newsletter
POPULAR AT PATHEOS Progressive Christian
1