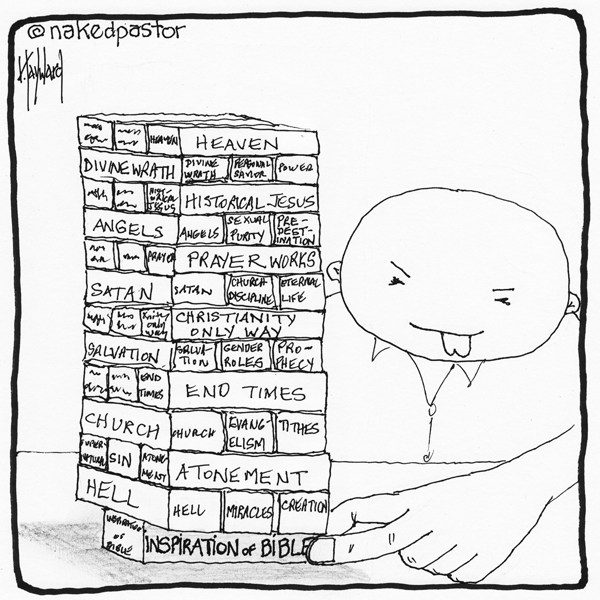 The above cartoon by David Hayward provides a really nice illustration of the issues related to foundationalism – even if there appear to be two blocks missing from the set. But the person in the cartoon doesn’t appear to be playing the game properly anyway. Anyone who plays Jenga, or fundamentalism, knows that you need to leave that one bottom block alone unless you want the whole thing to come crashing down.

Was it Nietzsche or someone else who said that, while philosophers take pride in the all-encompassing structures that they build, those who follow after them are happy if they can find the occasional useful stone in the rubble that is left from their systems of thought?

The problem is that we are constantly learning – or should be and can be – both as individuals and as a species. And so by definition any attempt to put together an all-encompassing worldview is bound to require revisions.

And so while some try to put the Bible – and a leap of faith about its character and contents – at the bottom, thinking that will hold up everything built on top of it, that is in fact a recipe for disaster. To the extent that you think that this is a game, one that you lose if your beliefs come crashing down, then you are setting yourself up to lose by doing this.

With some games, the only way to win is not to play. This is true of Bible, and of worldview construction (see my earlier posts “How To Win At Bible” and “Bible Prooftexting is an Unwinnable Game.”)

A better approach is the life of faith – not in the sense that ironically misunderstands faith to mean irrational and unshakeable certainty, but precisely in the sense that recognizes our own inability to know all and see all. Faith in the sense of a recognition that I am not God makes for a better foundation for one’s worldview, precisely because it not only prepares you to be open to revising your beliefs, but teaches you to expect to do so. 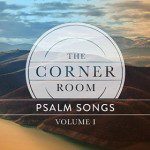 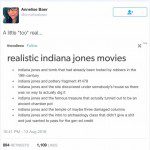 August 18, 2016 Realistic Indiana Jones Movies
Recent Comments
14 Comments | Leave a Comment
Browse Our Archives
get the latest from
Religion Prof: The Blog of James F. McGrath
Sign up for our newsletter
POPULAR AT PATHEOS Progressive Christian
1 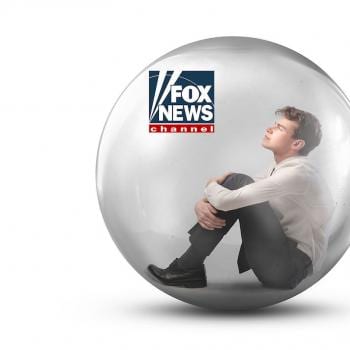