Bible Proof-Texting Is An Unwinnable Game 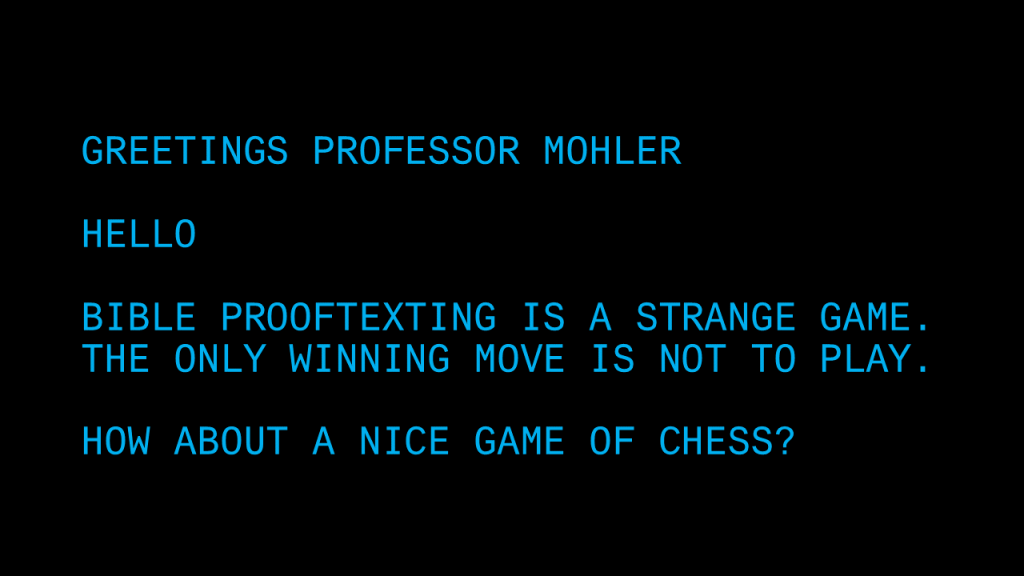 A couple of years ago, Fred Clark posted about the way playing Bible clobber verses resembles a card game. His point reminded me of the famous scene towards the end of the movie WarGames. And so I wrote, in a post entitled “How To Win At Bible”:

The only winning move in the clobber verse Bible game is not to play. For even to play the game concedes the rules for Bible reading to be what fundamentalists claim it is: a distortion which prefers select texts removed from their contexts to the deeper comprehension that can only come from treating texts as texts, as wholes, with sensitivity to genre, nuance, and other aspects of communication.

This topic seemed worth revisiting in relation to the current discussions about same-sex marriage. There are some who think that, if they can just find the right verses and the right interpretations of them, they can show the anti-gay Christians that they are wrong.

The defenders of slavery had a firm belief in an inerrant Bible. They had careful exegesis of the Bible on their side. They had specific passages lined up.

What they lacked was a prioritization of principles such as the Golden Rule.

If one is convinced that one should do to others as one would wish done to oneself, and one would not wish to be another’s property, then one cannot own another person.

No amount of exegesis should ever be allowed to trump empathy and compassion.