The Novelty of the Personal Relationship with Jesus

The Novelty of the Personal Relationship with Jesus August 13, 2016 James F. McGrath

I was asked on Reddit about a topic that I blogged about at some point in the past, but not finding the post in question, I thought I would revisit the topic. The phrases “personal relationship with Jesus” and “personal savior” are not only not found in the Bible, but are much more recent than that. Here is what Joel Miller discovered by performing an ngram to see how frequently the phrases appear in books (HT Scot McKnight):

Here’s some of what Miller wrote in commenting about the above graph:

C. S. Lewis said in his preface to Athanasius’ On the Incarnation that we tend to think like our contemporaries. In The Discarded Image he provided the historical example of early medieval pagans and Christians being difficult to distinguish; in many ways, they were more alike than different.

It’s the same with us. We can claim to be set apart and that our faith keeps us grounded, but what if our “personal” relationship with Jesus is just flailing in our self-centered cultural currents while we’re unaware of the pull?

Let’s go back to those Pharisees. They didn’t get bogged down in legalism because they ignored a personal relationship with Jesus—an anachronistic and wrongheaded concept to begin with. If we follow Jesus’ parable of the tax collector, we know they got in trouble because of pride and self-satisfaction. We need to be careful that our so-called personal relationships aren’t the same thing in disguise.

Of related interest, this quote from Rich Mullins came my way on Facebook a few days ago:

You guys are all into that born again thing — which is great. We do need to be born again since Jesus said that to a guy named Nicodemus. But if you tell me I have to be born again to enter the kingdom of God, I can tell you that you just have to sell everything you have and give it to the poor because Jesus said that to one guy too. But I guess that’s why God invented highlighters, so we can highlight the parts we like and ignore the rest. 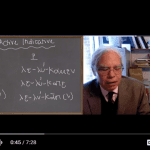 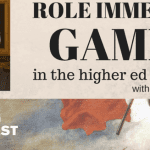 August 14, 2016 Minds on Fire: Reacting to the Past Through Role Play
Recent Comments
27 Comments | Leave a Comment
"That's a great question to bring into this discussion! It is really hard for us ..."
James F. McGrath “To Your Tents, O Israel!” A ..."
"Must be why the Republican party is purging anyone who won't fell@te trump."
Bones Understanding Whiteness
"this sounds really cool."
Brandon Roberts Brandon Hawk, Apocrypha for Beginners
"I have told you what CRT is twice.Twice poisoned:As Candace Owens notes, CRT is a ..."
Bob Shiloh Understanding Whiteness
Browse Our Archives
get the latest from
Religion Prof: The Blog of James F. McGrath
Sign up for our newsletter
POPULAR AT PATHEOS Progressive Christian
1