Romans 13 has been getting a lot of mention lately. Romans 13:1 was the one biblical text that the Communist authorities in Romania consistently knew. “Submit to the authorities” – the Bible says so!

We all know that the Bible can be used both to build and to bludgeon. The Bible itself contains multiple perspectives on authority. While there is a consistent rejection of violent uprising throughout the New Testament, the view of Roman authority in the Book of Revelation is very different from that in Romans 13.

Romans 13 (especially v3) is often mentioned by mythicists, who claim that it proves that Paul did not think of Jesus as an human who lived on earth and was crucified by human authorities. If he had been, it is argued, then Paul would not have written that the upright have nothing to fear from human authorities, who only punish evildoers.

The point is not without its force. But then one realizes that Paul himself persecuted Christians, and thus was himself counter-evidence to his own claim here!

It may be that Paul is simply contradicting himself here, or hasn’t thought through the implications of what he has written. But it may also be that Paul is focused more narrowly – in keeping with teaching attributed to Jesus in the Gospels – on the paying of taxes and refraining from armed revolt. That doesn’t entirely alleviate the difficulty of Paul saying that the righteous need not fear those in authority if they do what is right. But that is a problem that relates to tensions with Paul’s own life, and not merely that of the historical Jesus.

Feel free to talk about the use of this passage by mythicists, or its application to a Trump presidency, or anything else you like related to the topic! 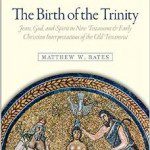 November 13, 2016
RBL Review of The Birth of the Trinity
Next Post

November 14, 2016 Blogging from a Phone
Recent Comments
4 Comments | Leave a Comment
"A very long time ago, I realized that Jesus is as much of God as ..."
gloriamarie Divinity and the Learning Jesus
"How in good consciousness can you lie so egregiously, when lying is a sin. And ..."
Bill Hegeman Obama Confesses To Being Hindu Muslim ..."
"It's actually pretty easy to be a decent human being. You should try it sometime."
Patrick Q Coup Take 2?
"There isn't anything directly Galilean from precisely this time, although the Enochic literature isn't much ..."
James F. McGrath Religion in Galilee and Judaea
Browse Our Archives
get the latest from
Religion Prof: The Blog of James F. McGrath
Sign up for our newsletter
POPULAR AT PATHEOS Progressive Christian
1