Which Sci-Fi Dystopia Are You Living In?

Which Sci-Fi Dystopia Are You Living In? November 10, 2016 James F. McGrath

To help with processing the election results, we connected them to a discussion (in my class on religion and science fiction) of dystopias.

First, I should probably highlight the fact that people around Indianapolis today were depressed and disheartened, with some even weeping. How can this be, you might ask, when Indiana voted for Trump and Pence? The urban centers are often very different from the rural surroundings. If you drive south from Indianapolis, you see Confederate flags flying from home after home. That is the constituency that has given you your new vice president, America. Consider that.

But back to the topic at hand. We actually found some things to be encouraged about. There are some sci-fi dystopias that we clearly do not live in. One is George Orwell’s 1984. We kept hearing things about both candidates, and fact checking thereof, if we wanted to. We could go to other outlets, whether CNN or Fox News, Al Jazeera or the BBC, and hear a different perspective, if we wanted to. No authority or power is controlling the flow of information in a global conspiracy.

But ironically, in what seems like it should be a less realistic scenario, people actually choose to believe deceitful sources of information, placing themselves in an echo chamber of ideologically-motivated misinformation. Yet if they were outside that echo chamber and some powerful force like Big Brother sought to place them in it, against their will, presumably they would resist and rebel. And so there is something even more dystopian about our reality than Orwell’s novel. We are not forced to hear only misinformation, and yet some choose to.

I did find myself thinking about the president in the movie Harrison Bergeron. But unlike in that dystopia, I do not think there is a secret organization actually running things from behind the scenes. We could easily imagine that (as in The Matrix, or in a different way, The Hunger Games), powerful forces at work collude to give people the sense that they are rebelling against the system, when in fact the “rebellion” is merely a way of providing an outlet for frustration that in fact serves to maintain the status quo. That in fact is very much how our society works, holding out a vision of the “American Dream” that it is simply impossible for everyone to realize, but which keeps people working; holding out the prospect that if we just vote for the other party this time, things will improve.

In our democracy, people are free to vote, and while we can impose education for the young, we cannot impose on adult voters that they inform themselves about candidates and parties, using reliable sources of information. But if we do things well in K-12 education, adult voters will be well-prepared. Here too, we find that people do not need some authority to prohibit them from accessing information or pursuing the kind of broad education about history, politics, and economics that makes for engaged citizenship. They happily skip those things, and resent them and tune them out if they are required courses at their college or university.

And so I am not sure that we closely resemble any sci-fi dystopia, and that is encouraging. But what is disheartening is that the dystopian elements of our society are freely embraced by a significant subset of the population, without anyone needing to impose or mandate them.

Which sci-fi dystopia(s) would you say you live in, or which do you see as a real possibility in the future of your society, and why? 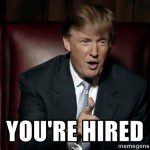 November 9, 2016
The Election Wasn't Rigged. Now What?
Next Post 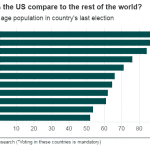 November 10, 2016 Why Hillary Clinton Lost
Recent Comments
17 Comments | Leave a Comment
"Intriguingly enough, since you mentioned "No one has suggested that Jesus was merely a carbon ..."
Chris H #JohnTheBaptist Enoch Seminar Nangeroni Meeting Day ..."
"Bestest post,..... My daughter who is incapable of being on the internet due to genetics ..."
davidt Evil In the Youth Group
"From my perspective this comes from a really problematic tendency in neo-liberal thinking to promote ..."
Chris H Jesus Wasn’t Unique
"It definitely seems memeworthy to me!https://uploads.disquscdn.c..."
James F. McGrath Evangelicals, Objective Truth, and the MSM
Browse Our Archives
get the latest from
Religion Prof: The Blog of James F. McGrath
Sign up for our newsletter
POPULAR AT PATHEOS Progressive Christian
1