From the Society of Biblical Literature’s “Hebrew Bible, History, and Archaeology” program unit:

Statement on the recent U.S. Executive Order: “Protecting the Nation from Foreign Terrorist Entry into the United States” We, the steering committee of “Hebrew Bible, History, and Archaeology” of the Society of Biblical Literature (SBL) and “Methods of Historiography in the Study of Ancient Israel and the Levant” of the American Schools of Oriental Research (ASOR) denounce the recent executive order by President Donald Trump banning entry into the United States for people from predominantly Muslim countries, regardless of their legal status. The executive order is damaging for the academic world, affecting scholars participating in the ongoing discussion as part of our program and our learned societies. But its most serious ramifications are those faced by the thousands of refugees who have been uprooted by violence and war, forcing them to flee their homes and seek sanctuary.

Our program is committed ancient history and archaeology, not only to cultivate a deeper sense of the past, but also to better understand the present. Our historical purview includes past cultures located within the areas directly affected by Trump’s travel ban. The movement of peoples, whether for reasons of immigration or forced migration, is an important element throughout the history of the ancient Near East. Indeed, the indelible mark of displacement is found in the Hebrew Bible’s traditions of exile. The effect of exile is acute in the historical consciousness of the biblical writers, from the memories of Zion that were once sung along the banks of the Euphrates (Psalm 137) in Iraq, to Nehemiah’s longing to return to Jerusalem from Iran (Nehemiah 2:3). The motifs of social dislocation and isolation from one’s homeland, which today pervade the refugee experience, are found in the declaration: “My father was a wandering Aramean” (Deuteronomy 26:5), and in the injunction, “the foreigner residing among you must be treated as your nativeborn. Love them as yourself, for you were foreigners in Egypt” (Leviticus 19:34). These are but a few examples of a wider concern that appears prominently in the Bible. The humanity inherent in these biblical verses is the very thing that is denied by the travel ban, particularly in its impact on refugees from the Middle East.

The executive order banning refugees is an affront to common decency, and an attack on human rights, implemented on an unprecedented scale. In the past few days, ASOR and SBL have issued statements denouncing the executive order. Both are linked below, and we include a quote from SBL’s statement regarding our learned society’s directive: “This mission of fostering biblical scholarship rests on the firm belief that the study of sacred texts and traditions involves unhindered intellectual exchange among scholars. Such open, scholarly exchange serves the common good by contributing to a broad public understanding of religious texts, traditions, and practices in the modern world.” Simply put, the executive order is antithetical to foundations of our academic societies (SBL and ASOR), and it is one that our program in particular will not abide.

The steering committee of the SBL program “Hebrew Bible, History, and Archaeology” and the ASOR program “Methods of Historiography in the Study of Ancient Israel and the Levant.”

The ASOR statement mentioned and linked to above is provided here for your convenience:

A Statement to ASOR Members
On Recent U. S. Government Actions

Several of you have been in touch

to comment on policies initiated by the new United States administration, especially (1) the Executive Order issued on January 27, 2017, that restricts entry of citizens of Iran, Iraq, Libya, Somalia, Sudan, Syria, and Yemen into the United States and (2) the proposal to eliminate the National Endowment for the Humanities and the National Endowment for the Arts, as part of cuts to the US federal budget. I write both to thank you for writing and, more important, to share with you ASOR’s response.

First, regarding the Executive Order, “Protecting the Nation From Foreign Terrorist Entry Into the United States” (link): this Executive Order, among other things, suspends the entry of immigrant and nonimmigrant citizens of Iran, Iraq, Libya, Somalia, Sudan, Syria, and Yemen into the United States for the next ninety days, until reviews are conducted to determine whether the countries in question provide information needed to certify that anyone seeking entry to the US is “who the individual claims to be and is not a security or public-safety threat.” After ninety days, it will be decided which countries adequately meet these requirements, and citizens of countries judged not to be in compliance would be barred from entering the United States until it is deemed that “compliance occurs.” Additional countries may be “recommended for similar treatment.”

ASOR counts among its members colleagues who come from many of the countries affected by this Executive Order. ASOR members across the globe, moreover, have innumerable friends and colleagues in these countries other than those who are ASOR members. ASOR’s members in the United States want only to extend to these friends and colleagues the warmest and most heartfelt hospitality when they come to the US, just as ASOR’s US members, and members elsewhere, have been extended warm and heartfelt hospitality in their time in the countries in question.

ASOR is thus profoundly concerned by policies that might undermine our friendships and collegial relationships. Indeed, and to the contrary, ASOR emphatically and unreservedly affirms that among our core values is the conviction that personal and cultural engagement and exchange among all of ASOR’s members and affiliates — including ASOR members, colleagues, and friends in the United States and ASOR members, colleagues, and friends in the countries affected by the Executive Order — are of inestimable benefit in promoting peaceful relations in our often troubled world.

Moreover, ASOR affirms its unwavering conviction that ASOR’s worldwide community of archaeologists, historians, and cultural heritage professionals who work together in countries such as Iran, Iraq, Libya, Sudan, Syria, and Yemen, and throughout the Near East and wider Mediterranean, are among those global ambassadors best able to promote understanding, mutual respect, and relationships of true well-being among our many nations.

ASOR, in short, asserts that security and safety for all concerned can flow from the alliances and goodwill that our members and affiliates have cultivated in our many years of working together as friends and colleagues in the Near East and wider Mediterranean. We seek policies that, instead of setting the United States at odds with whole citizenries in the Middle East, will foster among these nations the partnerships and collaborations that we at ASOR hold so dear, and we hope that going forward, our United States members will urge the US government to articulate policies consistent with these values.

ASOR as an organization, along with many, many ASOR members, has also benefitted from support extended by the National Endowment for the Humanities (NEH) and National Endowment for the Arts (NEA). The NEH has been committed to fostering our work of scholarly and personal engagement in the Near Eastern and Mediterranean worlds as part of its larger mission of supporting research, education, preservation, and public programs in the humanities and in those social sciences that use humanistic methods. The NEA has sustained ASOR members in their work by supporting museum exhibitions, care of collections, conservation, community engagement, and education activities.

Like many of our sister learned societies, therefore, we urge ASOR members who are United States citizens to speak out in support of the NEH and NEA, through the avenues provided by the National Humanities Alliance (of which ASOR is a proud member), at (NHA link), and PEN America link.

Again, I (and ASOR) thank you all for being in touch to voice your concerns, and I do hope you will be in touch with any other thoughts you might have.

In the meantime, and as always, all best, 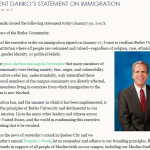 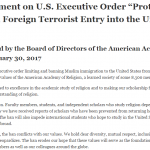 January 31, 2017 AAR and IQSA Statements about Executive Order
Recent Comments
2 Comments | Leave a Comment
Browse Our Archives
get the latest from
Religion Prof: The Blog of James F. McGrath
Sign up for our newsletter
POPULAR AT PATHEOS Progressive Christian
1