Two more major academic organizations have issued statements. I had begun working on one as co-chair of the American Academy of Religion’s Traditions of Eastern Late Antiquity program unit, since our geographical area of focus overlaps with that directly affected by the recent presidential executive order. Now that there is an AAR statement, however, I think I will just say that our program unit affirms this statement:

Board Statement on U.S. Executive Order “Protecting the Nation from Foreign Terrorist Entry into the United States”

Statement Issued by the Board of Directors of the American Academy of Religion on January 30, 2017

President Trump’s recent executive order limiting and banning Muslim immigration to the United States from seven countries strikes at the heart of the mission and values of the American Academy of Religion, a learned society of some 8,500 members.

Our organization is committed to excellence in the academic study of religion and to making our scholarship freely available in order to foster the larger public understanding of religion.

The ban impedes that mission. Faculty members, students, and independent scholars who study religion depend on the freedom of travel to pursue their work. Already we have received reports of scholars who have been prevented from returning home to the United States from research trips abroad. The ban will also impede international students who hope to study in the United States and to American students who plan to study abroad.

At a more fundamental level, the ban conflicts with our values. We hold dear diversity, mutual respect, inclusion, and free inquiry, all of which the immigration ban jeopardizes. The ban erodes our hope that these values will serve as the foundation for all governmental decisions regarding our members as well as our colleagues around the globe.

Finally, the ban poisons the public’s understanding of Islam in particular and religion in general. It blatantly and explicitly discriminates against Islam and Muslims, and appears to provide special treatment of Christianity. It violates our national commitment to welcome persons of all religions.

With learned societies, colleges and universities, and educational leaders across the nation, we call on the President and Congress to retract the Muslim immigration ban and to denounce religious intolerance in all its forms.

Another scholarly organization that has released a statement is the International Qur’anic Studies Association:

The Board of Directors of the International Qur’anic Studies Association (IQSA) offers this statement in response to President Donald J. Trump’s executive order banning the entry of citizens from various Muslim-majority nations, including permanent residents of the United States:

IQSA is an academic society whose mission is explicitly to build “a bridge between different global communities of Qur’anic scholarship” and to “promote cooperation across global boundaries.” Our organization is wholly dependent on the free exchange of ideas, including the international travel of scholars and students from all around the world. IQSA is a unique organization supporting regular, high quality, text-critical study of the Qur’an. Critical scholarship is the most effective weapon against extremist, fundamentalist narratives. This executive order directly threatens the work of IQSA to further dialogue between cultures and promote peace and mutual understanding through scholarship.

The travel ban also undermines international scholarship and damages the goodwill built between scholars belonging to different cultures. Moreover, the travel ban only reinforces the false notion that Muslim-majority nations and the Unites States are locked in a “clash of civilizations.” Scholars from Muslim-majority countries, including those banned on January 27, 2017, make an essential contribution to our organization and more generally to scholarship and education here in the United States. We hereby oppose this travel ban, and we stand by our friends and colleagues in the Society of Biblical Literature (SBL), American Academy of Religion (AAR) and throughout the US higher education system who have expressed their opposition to this ban. 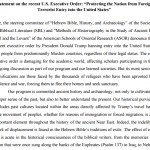 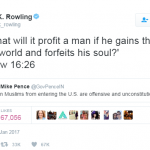