I was delighted to have an opportunity to see an advance screening of Martin Scorsese’s new movie Silence tonight, a couple of days before it opens here in Indianapolis. I went with a friend who has read Shūsaku Endō’s novel, and he said the movie is remarkably faithful to the book – except perhaps the very final shot of the movie, which I won’t say anything about here. This blog review will not remain spoiler free, and so if you are trying to avoid finding out anything in advance of seeing it, I will highly recommend the movie now, and save you having to risk spoilers as you scroll to the end to find out whether I recommend the movie or not. 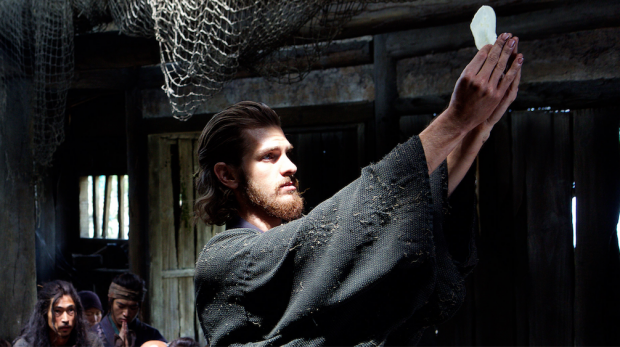 The film is an exploration of faith and doubt (like the novel, I am told – I have long wanted to read the novel, and I am now persuaded to prioritize doing so as a result of watching the movie). The backdrop is the persecution of Christians in Japan in the 17th century. The movie is quite graphic in its depiction of the tortures inflicted on Christians, and it is really quite remarkable to think about the fact that a major motion picture is focused so thoroughly on this theme. As a Christian myself, as well as a professor who teaches courses about faith and doubt, it is a truly powerful exploration of a great many things, ranging from what it means to believe and be faithful, to the nature of apostasy and the power of religious symbols. But the movie seems to me to be one that can be appreciated even by people who do not share the Christian faith of various characters, and of the novel’s author and the film’s producer. The voices of doubt, pragmatism, Buddhism, apostasy, and weakness are also presented in the movie in a manner that is also compelling. As the character of Father Rodrigues notes about the evil he senses round about him in the inquisitor’s prison, it is something that is not without an element of beauty. And the movie ultimately is not simply about “faith” and “doubt” in some superficial sense, but about whether even an act such as apostasy can itself be a profoundly religious ethical act. When a priest is drowned in the act of trying to save Christian believers who are being killed, is that any less heroic that being willing to trample on an image of Christ in order to end the suffering of one’s fellow believers? In such a situation, what would Jesus do?

The story focuses on two priests, and in particular on one of them, who go to the very dangerous Japan, where Christians have been massacred in the thousands, to find out whether rumors that a missionary (Fr. Ferreira) had apostatized are true. Fr. Rodrigues and Fr. Garrpe set out to sneak into Japan, and find their own faith invigorated by the faithful Christians who have persevered there and who welcome them. Indeed, the Japanese converts are much more stoic in the face of threats of execution throughout most of the film than the Portuguese priests are.

Throughout the movie, we see Christians dying for their faith, as well as Christians compromising and stepping on an image of Jesus in an effort to save their families and fellow villagers. 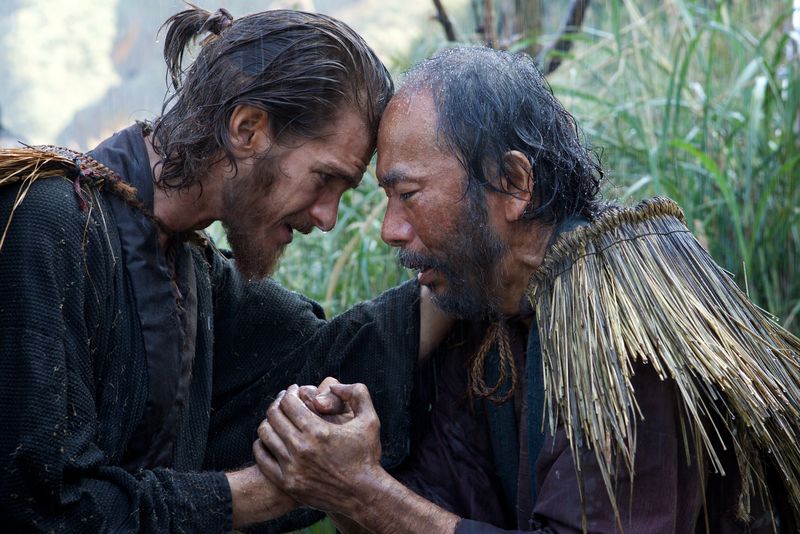 Tertullian’s statement that the blood of the martyrs is the seed of the church is made reference to, and eventually when Fr. Rodrigues is betrayed and falls into the hands of the Inquisitor, he has powerful responses to offer to the challenges addressed to him. If the conflict among religions (or colonial powers) brings disharmony to Japan, like a famous story about a man with four squabbling concubines, then why not pick just one, marry her, and be faithful? And when it is claimed that the soil of Japan is not well suited to the flourishing of the plant of Christianity, who can really dispute that in fact it is not the soil itself that is the problem, but the actions of those who poison the soil and seek to uproot the new plant?

The biggest challenge to Fr. Rodrigues’ faith comes not when confronted with God’s silence conjoined with the torment and executions inflicted on Japanese Christians. It is when he finds that his former mentor and former fellow priest, Fr. Ferreira, is studying at a Buddhist monastery and writing a book about Christianity as a deception.

But the language of liberal acceptance that truth may be plural is not ultimately compelling, however painful it may be to see one’s hero fallen. Fr. Rodrigues is fully aware that the arguments of Fr. Ferreira (now known by a Japanese/Buddhist name he has adopted) may be using these arguments in an attempt to justify his own apostasy.

What ultimately sways Rodrigues is the argument that if Christ were there (seeing Christians tormented by being hung upside down over pits, with boards closing their heads in them, and incisions made in their heads that cause intense suffering as they slowly bleed), he would act. In the face of their suffering, God is silent, but he need not be.

But even more persuasive is the voice of Jesus that he hears, coming from the image of him on the ground, inviting him to step, to act to save others’ lives.

And later in the movie, that same voice emphasizes that in the silence Christ was not absent. He was suffering with him, with all who suffer. It is in the silence that God is to be found.

And so in the end, the movie confronts us with a powerful challenge. If we make an image of God, or some religious figure, so important that we are willing to sacrifice not merely our own lives but those of others in order to preserve its sacredness, is that in fact genuine fidelity/religiosity/piety? Or is the most courageous act to sacrifice one’s own faith and integrity – and in some worldviews, one’s mortal soul – in order to save others? Paul the apostle famously said that he would be willing to be cut off from Christ if he could save his fellow Jews. In the movie, Fr. Rodrigues is eventually mocked as “Paul the Apostate.” But what, if anything, makes his choice the wrong one? And can a willingness to sink into the depths of despair because of one’s compassion for others be a more powerful expression of faith than is a clinging to beliefs of a sort that seek to deny the full, harsh reality of that suffering and the problem it raises for belief in God?

The movie is incredibly profound, and in an era when there is so much tendency towards either uncompromising religious dogmatism, or uncompromising relativism, this story of a faith that is flexible yet committed, asking about the limits of movement in either direction, is incredibly timely. As Japanese Christians were asked in the movie to stomp on an image of Jesus, I could not help recalling the incident a few years ago in which a professor asked students to step on a piece of paper with the name of Jesus written on it.  The movie explores in a beautiful, deep, insightful, moving, and ultimately compelling way questions about what is most important to us, whether sacrificing one’s faith to save others cannot be as much an act of devotion as sacrificing one’s life, and the nature and role of religious symbols, and ideas of truth, in our lives. This is a very powerful movie, and I look forward to talking more about it once you have seen it. In the meantime, I will simply recommend it with great enthusiasm and urgency, in particular to all who are interested in dramatic explorations of religious faith. This is a movie that I think will continue to be watched and talked about for many years to come. 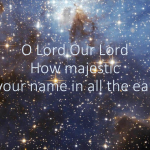 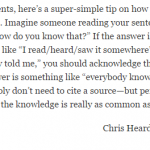 January 11, 2017 Avoiding Plagiarism
Recent Comments
0 | Leave a Comment
"Glad you found your way here!"
James F. McGrath Donald Trump vs. the Kobayashi Maru
"The devil is a funny funny topic!"
davidt Fox News is Full of Sith
"If 'there are' 'in fact' two 'coexisting' 'universes', then whatever is trapped in one of ..."
tell me when it's over Is It Reasonable To Believe In ..."
"Just discovered this blog through a reference on a Youtube channel I follow. And what ..."
Dan McCollum Donald Trump vs. the Kobayashi Maru
Browse Our Archives
get the latest from
Religion Prof: The Blog of James F. McGrath
Sign up for our newsletter
POPULAR AT PATHEOS Progressive Christian
1