The above piece by Steve Reich takes its inspiration from the shared sacred site marking the burial place of Abraham. It is one of the sites in the Holy Land that made the biggest impression on me. On the one hand, Hebron today is a place of serious tensions. Visiting, one sees Palestinian homes from which a ladder allows them to climb out a rear window on the Palestinian side of a checkpoint, rather than go through their front door and then have to pass through Israeli security to get where they are going. One sees a shopping street with a wire fence above it to keep settlers from throwing rocks and garbage on the Arabs below them. One sees graffiti that says “Gas the Arabs.” (See my thoughts on that phrase in an earlier blog post here.) 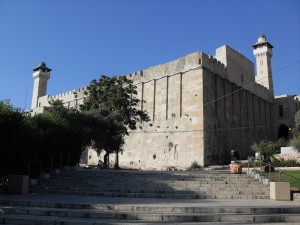 And yet one also may visit the Ibrahimi Mosque, the “Tomb of the Patriarchs.” Indeed, if one doesn’t look Arab, one may visit both sides of it. One part of the building is a mosque. The other is a synagogue. A checkpoint separates the two, and metal detectors are in place. Tensions are high, since an American-born Israeli named Baruch Goldstein once opened fire with a gun in the mosque, killing many and wounding many more.

Yet for all the disheartening character of the site’s history and current set up, even looking at the supposed burial place of Abraham and Sarah through bullet-proof glass, I could not help but feel the potential of such a shared sacred space to provide hope and a ground for finding commonality and forging peace. When Jews and Muslims pray at this site, they are literally facing the same focal point, and also facing one another.

The question is how we take those things that we share in common – the same sites, the same texts, the same prophets, and the same God – and use them as a basis to love rather than hate, to heal rather than harm, and to work towards peaceful coexistence and even cooperation rather than conflict, war, and division.

Have you been to Hebron? Did you find it entirely disheartening, or could you too see a glimmer of hope? 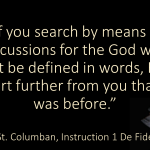 June 23, 2017 The God Who Cannot Be Defined In Words
Recent Comments
0 | Leave a Comment
Browse Our Archives
Follow Us!