When I mentioned in my course on the Bible and music that one of my favorite composers is Erich Wolfgang Korngold, this led a student to express interest in doing research related to his music. My initial reaction was to find myself unable to find much in the way of direct connection to the Bible. But then I was reminded that Korngold provided some music for the movie The Green Pastures, based on the dramatization by the same name of the book  Ol’ Man Adam an’ His Chillun by Roark Bradford. This is presented as a collection of African-American folk retellings of Biblical stories. Here is a snippet of Korngold’s music for the film:

You can watch the movie through Amazon video. I was in turn also reminded about this incident from Korngold’s life associated with his work on that film score:

Green Pastures, an interpretation of biblical stories seen through the eyes of children, had an all black cast. Also under production at Warner Brothers, they asked Erich to supply a few orchestral passages. While doing this, Erich became acquainted with Hall Johnson, arranger of the Negro spirituals. Hall, who was also a Doctor of Music, spoke fluent German. Erich enjoyed the company of Hall and Rex Ingram, who played the part of God. Questioning why the two never joined him in the executive dining room, the Green Room, Korngold was finally told that all blacks had to eat in the studio cafeteria. He left the Green Room, shouting on his way out that he was going to the cafeteria to eat with God! Erich enjoyed working on the film with them, and refused to accept payment or to allow his name on the credits. He did not want to shadow Hall Johnson’s work in any way.

Read more in the Korngold biography The Last Prodigy, from which the above quote is taken, as well as in Bonnie Finn’s study. 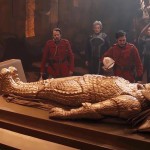 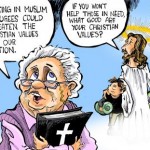 June 12, 2017 Joel Baden on the Bible and Immigration
Recent Comments
0 | Leave a Comment
Browse Our Archives
get the latest from
Religion Prof: The Blog of James F. McGrath
Sign up for our newsletter
POPULAR AT PATHEOS Progressive Christian
1