Worse Than Salvation By Works

This struck me while discussing the Gospel of John’s depiction of judgment as based on belief in the present (3:18), versus judgment based on works in the future. If believing in this context means having the right ideas, then that presents a serious problem. Belief in God is the most foundational kind of belief in the Bible. If what that means believing the right things  – assenting to the precisely correct doctrines – about a God that transcends what humans can ever hope to comprehend, then that creates an impossible situation for human beings, one that is arguably far worse that that connected with not being able to “earn your way to heaven” through good works.

Not only does believing the right things about the incomprehensible, unimaginable, and infinite pose a greater challenge than accomplishing the unattainable goal of moral perfection, but it also makes salvation a matter of luck. Who is saying the right things about this God, in precisely the right way? Which competing claims must one assent to in order to be saved, lest one be punished? How can a human being hope to choose rationally between them and make exactly the right choice, when the full answer is ultimately beyond the grasp of every one of us?

Of course, the matter gets even worse when one supposedly also has to believe the right things about the Bible and its meaning, leaving one’s eternal fate to depend on choosing the right view of the atonement, eschatology, and so on. And worse still, when we realize that this belief system doesn’t substitute grace and faith in the place of works as the means to salvation, but turns faith into the one work that humans still need to do, and do correctly, in order to be saved.

Thankfully, the biblical literature talks about the faith that saves as faith in God. And more importantly, it makes the actual lynch pin of salvation God’s grace rather than the human response to it. Too often, salvation is viewed in economic or judicial terms, so that it is a switch that one flicks by assenting to this or that (and for some, once the switch is turned on, it can never be turned off again). But when we realize that the emphasis in the Bible is not believing certain things to be true – and then believing one’s beliefs to be absolutely correct and certain – but trust in God precisely because as human beings we inevitably fall short not only in our actions but also in our thinking.

A familiar biblical text, Proverbs 3:5, captures the essence of this when it says “trust in Yahweh with all your heart, and lean not on your own understanding.” I’ve commented before on how fundamentalists invert the meaning of this. But the attempt to pretend that a matter of biblical interpretation or theological reasoning does not involve human understanding should not persuade anyone. To rely on God means trust in the midst of uncertainty and a failure to understand, just as we do in the midst of our moral failures and shortcomings.

If “salvation by faith” is to mean anything that is reassuring, then it surely has to mean trust in a God that is gracious, and cultivating a relationship to that God, rather than getting beliefs correct. Do you agree? 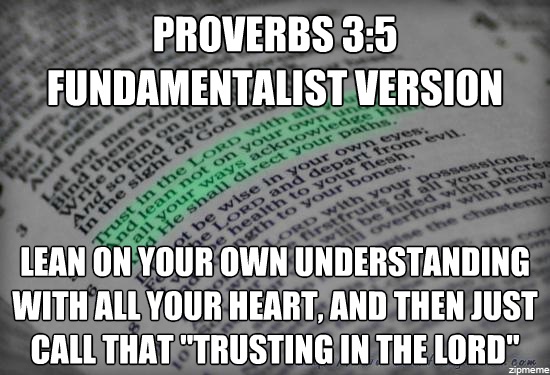 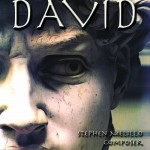 August 10, 2017 "David" by Stephen Melillo
Recent Comments
12 Comments | Leave a Comment
"is the argument that canonical authority is rooted in Scripture qua Scripture, or that the ..."
gadfly Come Compromise at Crooked Creek Baptist ..."
"...because, if you confess with your mouth that Jesus is Lord and believe in your ..."
gadfly Conservative Christianity Isn’t Christianity
"Thank you for trying! I'll read these once I turn my attention back to this ..."
James F. McGrath Cercetări în Istoria Propagandei Comuniste despre ..."
"I may have found a little Romanian literature on this:At some point it looks like ..."
Chris H Cercetări în Istoria Propagandei Comuniste despre ..."
Browse Our Archives
Follow Us! 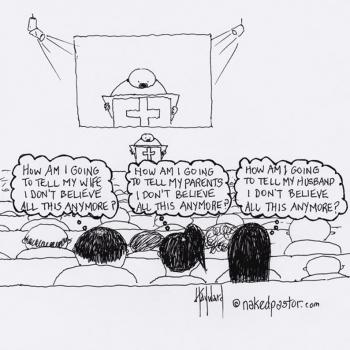