For me, the biggest objection to replacing BC/AD with BCE/CE is that it is fundamentally dishonest. For better or worse, we have a global dating system because the world was pretty much conquered by Christian imperialist powers who could enforce European Christendom norms on the rest of the globe. Calling the time since the approximate date of Jesus’ birth “Common Era” as though this is a matter of mutual agreement, and nothing to do with a particular history of faith and conquest, is simply untrue.

In functional terms, the Christian system is no better or worse than the Muslim, Jewish or any other. We could even all decide to add 753 to all our dates and go back to the mythical AUC (from the foundation of the city – ab urbe condita) of the Roman Empire. However, we are where we are because of a very specific Christian history that indelibly stamped its mark on the globe.

Yes, it can be replaced, but replacing it with a somewhat fraudulent name, while keeping the same dating system seems to me to be simply an act of intellectual dishonesty. It is a refusal to acknowledge the imperialist and religious history which has brought us to this point.

There is no common dating system based on anything other than historical contingency, and surely it is better honestly to acknowledge the specific stories and circumstances which have shaped the world in which we live, like it or lump it, than to gloss the often bloody reality with this seemingly objective and thinly consensual patina of neutrality.

Click through to read the rest. One of the few things that has led me to view the use of BCE/CE a bit less negatively is the fact that (as Doug mentions in his post) it allows one to avoid the oddity of having to say that Jesus was born approximately six years Before Christ… 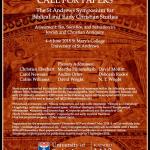 October 9, 2017 Of the Burning of Books There is no End
Recent Comments
28 Comments | Leave a Comment
Browse Our Archives
Follow Us!