With the proverb “If you want peace, prepare for war” as its title, it isn’t surprising that episode 8 of the first season of Star Trek: Discovery starts with a battle scene, focuses on a plan to overcome the Klingon cloaking device technology, and features elements that resonate with the Cold War era context of the original series, such as L’Rell, a Klingon who claims that she wants to defect to the Federation.

For those interested in how the show treats religious and spiritual themes, there was a lot that was of interest, ranging from the subtle to the explicit.

When L’Rell says in passing “Kahless willing,” mirroring “God willing,” it shows, if nothing else, that the scriptwriters have given some thought to the fact that Klingon core beliefs ought to find expression in turns of phrase that are interjected in such instances. It may be superficial, or specifically aimed at connecting with human viewers in a particular way, but it is better than no engagement with the religious beliefs of non-humans and what their practical outworkings might look like.

One main storyline focuses on the planet Pahvo, on which the living things join in generating a constant sound, a “music,” that the planet also broadcasts into space. The landing party discovers that a light phenomenon that they encounter is some kind of sentient being – or rather, the planet as a whole involves a “symbiosis of matter and spirit,” so that the world itself is sentient.

That sentience is concerned with spreading harmony. Saru (played by Doug Jones, from Indianapolis!) is “converted” and wants the three of them (himself, Michael Burnham, and Ash Tyler) to remain, to enjoy the perfect state of harmony the Pahvons experience with their world. In trying to persuade Tyler, Saru offers a delightful challenge when he asks whether it is better to let go of and leave behind evil that has been done to you, or to cling to it and allow it to transform you into something worse than the perpetrators.

Later, when Michael fights Saru, she says, “I would give anything for…a millisecond of peace. But until this war is over, none of us can have it.” And later still, back aboard Discovery, Saru shares in sickbay that his species lives every moment from birth in fear. And so, far from not being himself, his actions on Pahvo reflected an aspect of the very core of his being. On that planet was the first time he knew what it feels like to be free of that constant fear.

Anyone interested in religion must recognize that religious and spiritual traditions and teachings connect with human beings (and presumably other sentient life in the universe) in profound, cathartic, life-changing ways. Dismissing it all as myths and morality, cosmologies and rituals, without doing justice to the experiential and existential elements will always ring hollow. This episode gets at that point, and arguably does so in a better manner than Star Trek V: The Final Frontier.

Instead of broadcasting a signal to make cloaked ships visible, the Pahvons invite the Klingons and Federation to their world, hoping to bring harmony to them. The episode ends with a Klingon ship coming out of warp there, and Michael Burnham telling the captain that they are going to have to fight.

Another great episode – it is simply delightful having new Star Trek again!

In other news, you can order a range of Star Trek: Discovery books, music, and even costume on Amazon.com already. I’d be interested in getting one of those shirts they wear that has the ship’s name shortened to “DISCO” on it. If you ever see those available in size small, please let me know… 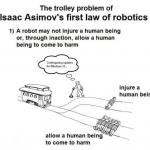 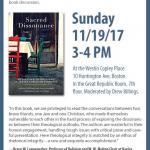 November 10, 2017 Not to Miss at #AARSBL17 on Sunday, November 19th
Recent Comments
3 Comments | Leave a Comment
Browse Our Archives
Follow Us!