A Conversation Between Jesus and Karl Marx

A Conversation Between Jesus and Karl Marx May 1, 2018 James F. McGrath

He started the post with a quote from Richard Rorty which is also worth sharing: “We should read the New Testament as saying that how we treat each other on earth matters a great deal more than the outcome of debate concerning the existence or nature of another world.”

Read more on Morgan’s blog Freelance Christianity. But perhaps before doing so, give some thought to how you think a conversation between Jesus and Marx might go. It is easy to latch onto some of the very obvious points of divergence or convergence. But it is more useful, I think, to imagine them having a meaningful conversation that does not simply argue in opposition nor shake hands in agreement, but critiques the precise nuances on which they come close but ultimately don’t see eye to eye.

Elsewhere, Yanis Varoufakis emphasized the relevance of Marx to our time even more than to his own, since we have seen capitalism move more fully in the directions that he foresaw and critiqued since then. When I shared that post, I got some interesting reactions from conservative Christians, many of whom, I suspect, dislike Marx most because of the awkward attention that his views draw to what Jesus had to say about possessions, wealth, poverty, and a range of other economic subjects.

See too the birthday wishes to Karl Marx in yesterday’s New York Times. Marx’s birthday is May 5th, but May 1st is International Workers’ Day, and so I thought posting this today was more appropriate. Here’s a snipped from the NYT article by Jason Barker:

Marx arrives at no magic formula for exiting the enormous social and economic contradictions that global capitalism entails (according to Oxfam, 82 percent of the global wealth generated in 2017 went to the world’s richest 1 percent). What Marx did achieve, however, through his self-styled materialist thought, were the critical weapons for undermining capitalism’s ideological claim to be the only game in town.

On this topic see too Noah Fryman’s post from last year about the awkward relationship between both Karl Marx and Jesus on the one hand, and the organized movements and institutions that look back to and claim them on the other.

Of related humorous interest, see the Existential Comics about Karl Marx and Rosa Luxemburg finding themselves shipwrecked on a desert island inhabited by Ayn Rand and Murray Rothbard, and also the comic strip Supply Side Jesus.  Here’s a sample of the latter – click through for the rest! 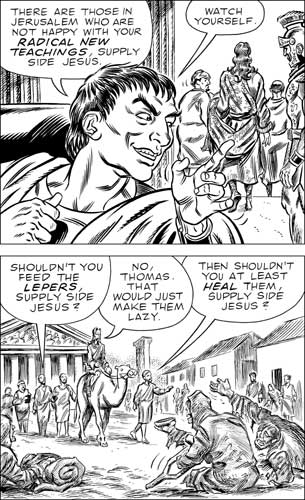 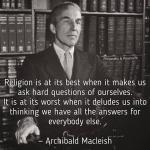 May 2, 2018 Mandaeism ARAM Conference July 2019
Recent Comments
24 Comments | Leave a Comment
Browse Our Archives
get the latest from
Religion Prof: The Blog of James F. McGrath
Sign up for our newsletter
POPULAR AT PATHEOS Progressive Christian
1