Conversation with a Colleague about Inerrancy (Part 2)

Here is some more of my conversation with a colleague about inerrancy:

Thoughts on Frame’s points under the criticisms section?

I think the problem is that there is still the assumption that not only is there an ultimate authority, but also the assumption that the human being engaging in the circular argument has grasped the meaning and will of that authority so perfectly that none of the uncertainty that comes with being human needs to temper the conversation.

Isn’t this just foundationalism in another form, except that instead of trying to build everything on the certainty of one’s own existence as per Descartes, the attempt is to start with not merely God but “the God of Scripture” which means not the God of whom the biblical authors wrote as human beings, but a God presumed (in a manner that is shielded from all critical examination) to be described in Scripture with sufficient precision through a process overseen by the divine hand so as to ensure that, once again, any limitations of human comprehension or language are negated.

I can understand the appeal of wanting to simply step into that circle. It is very reassuring. But it still seems to me to result from a human desire to avoid humbly accepting the fallibility of human reason, thought, and comprehension.

Those are my thoughts on the “criticisms” section, very briefly. I look forward to talking more about this!

I think your response continues to demonstrate the difference between us. Here you have questioned whether or not there is an ultimate authority, it seems, while I believe that there is an ultimate authority, that we can know that with certainty, and that we can understand the Bible enough to grasp the meaning and will of God—though perhaps not “perfectly,” as you suggest, but with a high degree of certainty.

You suggest that this (I assume by “this” you might be referring to presuppositionalism?) is just another form of foundationalism built on the certainty of “the God of Scripture” (as opposed to just God). I suppose that is correct, and it seems like you’re working to discredit the authority and inspiration of the Bible.

I find it ironic, I suppose, that you think we should “humbly [accept] the fallibility of human reason, thought, and comprehension” while asserting your ability to determine that the Bible isn’t authoritative and what it does or doesn’t say. Is it not possible that your inherent fallibility precludes you from submitting to the authority of God’s Word? You seem certain that uncertainty should be the hallmark of one’s epistemology. Do you think Isaiah 5:21 has anything to say about this?

Frame writes, “In Christian epistemology, God’s word is the ultimate criterion of certainty. What God says must be true… So God’s word is the criterion by which we can measure all other sources of knowledge… Our certainty of the truth of God comes ultimately, not through rational demonstration or empirical verification, useful as these may often be, but from the authority of God’s own word.” (https://frame-poythress.org/certainty/)

I am pretty sure that when I was an inerrantist I used to try to play this sort of “gotcha” game myself. If I wanted to, I could presumably play it right back at you and say that unless you are an inerrant ultimate authority yourself, presumably you could be wrong in your perception that the Bible is supposed to be the ultimate authority. But I think it is more helpful to emphasize that I really mean what I say about human fallibility, I changed my mind about the Bible because of evidence within the Bible itself, and I am open to changing it again if I believe the evidence justifies my doing so.
I had no desire to get away from inerrancy. On the contrary, it was the recognition that I was doing something inherently contradictory and self-defeating – defending my inerrantist doctrine about the Bible against evidence within the Bible itself – that led me to change my mind. It is precisely because I found that inerrancy disrespects and refuses to accept what the Bible actually says that I begrudgingly chose the Bible over biblical inerrantism.
I’m not sure that there is anything to add in response to your email except that, unless you simply assume that the Bible is the Word of God, rather than the words of the human beings to whom the works within it are at times explicitly but most often at least implicitly attributed, then the quote from Frame doesn’t carry much weight if any, and indeed seems like just another attempt to deny human fallibility and grasp at a certainty that belongs to God alone, by turning the Bible into a pope with pages. I can understand the attractiveness of doing so, but unless you are going to accept the responsibility of making a case for this in a non-circular way, presumably you are giving up on anything that deserves to be called apologetics, since circular argument isn’t making a case for your beliefs, it is insulating them from scrutiny in a way that seems deliberately designed to make them unattractive to those outside, placing a stumbling block between your hearer and the gospel. When this is done in conversation with someone who used to hold your viewpoint and abandoned it because of the evidence within the Bible itself, it is obviously going to make your stance seem even less credible and less worthy of serious consideration, as it appears to be precisely what I used to think, coupled with an admission that you cannot make a case for it but must simply assume it!

The conversation will continue next time… 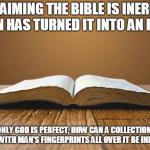 May 30, 2018
Conversation with a Colleague about Inerrancy (Part 1)
Next Post 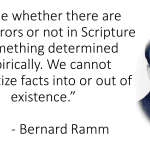 June 1, 2018 Conversation with a Colleague about Inerrancy (Part 3)
Recent Comments
4 Comments | Leave a Comment
"I am really looking forward to this. Every Sunday I post sacred music to my ..."
gloriamarie Developing an Open Textbook on the ..."
"Amen to a theology that is awake and questioning. My seminary experience was very much ..."
Zeigler John Theology of Once in a Lifetime
"Very true Dr McGrath, the propensity to believe that the 'experts' have ulterior motives is ..."
Leigh Sutherland Academic Consensus for Laypeople
"Yep. The New Testament by and large is oriented toward concrete political outcomes for Israel ..."
Phil Ledgerwood Restoring the Kingdom to Israel
Browse Our Archives
Follow Us!