Conversation with a Colleague about Inerrancy (Part 1)

Conversation with a Colleague about Inerrancy (Part 1) May 30, 2018 James F. McGrath

I thought I would giver readers of the blog the chance to listen in on the conversation that I have been having recently with a colleague on the topic of biblical inerrancy – in case any of you are curious how I sometimes end up blogging about the topics that I do, or in case you find the conversation helpful as you explore and discuss the topic yourself…

I read your “Just Sayin” post today and clicked through your link to your post from 2010 about Eccles 2: http://www.patheos.com/blogs/religionprof/2010/03/the-inerrancy-of-ecclesiastes-92-6.html

Not sure if you’ve had any dialogue about it over the past seven years, but I hold to Biblical inerrancy and I don’t see it at odds with any Christian doctrine about the afterlife. The author is talking about the seeming meaningless of life. “All share a common destiny”: DEATH.

In 40 Questions About Interpreting the Bible by Robert Plummer, he writes, “Inerrancy respects the authorial intent of the passage and the literary conventions under which the author wrote” (42). It doesn’t seem that the intent of the author of Eccles was to deny the afterlife, but rather merely to state that when people die “they have no further reward [under the sun/on earth].” Maybe you reject the bracketed part; but to think it teaches the rejection of the afterlife, you also have to add something in those brackets—and what you add is the presupposition you’re bringing that it rejects the afterlife.

People live and then people die and then “never again will they have a part in anything that happens under the sun.”

If you think the author rejects the afterlife, then what do you do with the very end: “Fear God and keep his commandments, for this is the whole duty of man. For God will bring every deed into judgment, with every secret thing, whether good or evil.” If we die and that’s it, where does this judgment come into play?

This article from TGC has been helpful to me in understanding Ecclesiastes: https://www.thegospelcoalition.org/article/everything-is-not-meaningless

Thanks for reading my blog post from this morning, and being interested enough to click further and read the older one that I linked to! As Tremper Longman says in the Gospel Coalition piece you linked to, “Qohelet has no confidence in an afterlife.” The statements in 9:5 do not require the additions you wish to make, and are not obviously compatible with them, since “the dead know nothing [under the sun]” is not an obvious way of understanding it. Whether the epilogue is an attempt to make an earlier text more orthodox, or simply means that deeds are judged by God, neither view requires us to understand the author to envisage something at the end of the book that was not envisaged in the earlier passages.

Remember that my life is a breath;
my eye will never again see good.
8 The eye of him who sees me will behold me no more;
while your eyes are on me, I shall be gone.
9 As the cloud fades and vanishes,
so he who goes down to Sheol does not come up;
10 he returns no more to his house,
nor does his place know him anymore.

The idea of an afterlife is missing from most of the Hebrew Bible/Christian Old Testament, which is why the prophets predict that calamities like famine, plagues, and exile will come as a punishment for the nation’s misdeeds, and never that they will be sent to hell because of them.

It isn’t that these texts are actively denying that there is an afterlife over against some other group that thinks there is one. They simply ignore it for the most part, and only occasionally mention it as explicitly as “the one who goes down to the grave/sheol does not come up.”

I wonder what you think about the idea that Qohelet (and even Job) are but characters in a story who are used to serve an author’s meaning and intent. I don’t mean to imply they are fictional characters, but that characters can say unorthodox or even heretical things that ultimately serve to advance the author’s message. So while there are texts in Eccles or Job that may seem to ignore or deny the afterlife—in this case—it doesn’t mean that the author was denying the afterlife. Inerrancy doesn’t rest upon one section in the story, but upon the author’s intent.

Likewise, Christians should recognize the doctrine of progressive revelation. As redemptive history moves toward Christ as the fulfillment, other doctrines become clearer. This does not contradict inerrancy, because the Bible is one story with developments throughout.

My reply emphasized that judgment, for biblical Wisdom literature as well as ancient Israel’s prophets, consisted of things that happened within history. I can’t recall whether I added in my email that it was the fact that people did not always get what they deserve or die as they deserve within history that led to the development of the doctrine of an afterlife (something I’ve spoken about here on the blog in the past).

I will share more of this conversation in upcoming posts. Stay tuned! In the meantime, here is a meme with something that Perry Shields said in a Facebook conversation, which I thought deserved to be shared with a wider audience as a meme, and he kindly obliged: 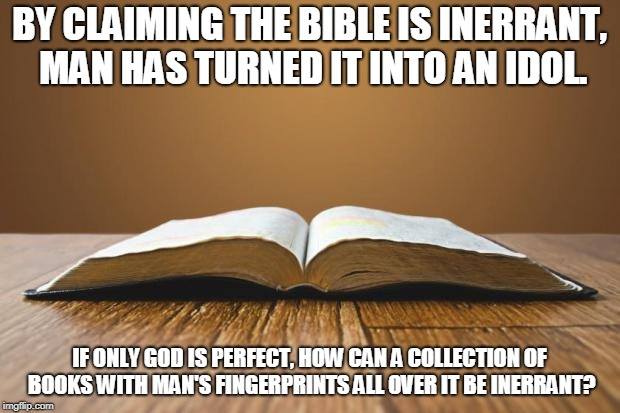 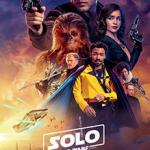 May 29, 2018
Solo and the Secular and Spiritual of Star Wars
Next Post 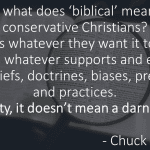 May 31, 2018 Conversation with a Colleague about Inerrancy (Part 2)
Recent Comments
5 Comments | Leave a Comment
Browse Our Archives
get the latest from
Religion Prof: The Blog of James F. McGrath
Sign up for our newsletter
POPULAR AT PATHEOS Progressive Christian
1