I leave the theme of creation until well into the semester when I teach the Bible and music. When we get there, I try to use it as an opportunity to explore and reflect on not only the meaning of the texts, not musical settings of those texts, but also students’ own creative activities. For their final project for the class, students are expected to produce a song or piece of music of their own. Since many of them do not have a musical background, they often respond with fear and trepidation to the very suggestion, which appears to perhaps be asking the impossible. However, I clarify that there are many ways that they can be creative with biblical text and music. They can adapt a biblical text or story to an existing melody. They can write new music and words. They can do any number of things, including some that I don’t list on the syllabus precisely because I should not assume that any students in the class will come with the requisite abilities or have time to develop them over the course of a single semester.

For many of the students, this is nonetheless the most daunting thing I ask them to do. The Perspectives in the Creative Arts core curriculum requirement at Butler University includes participation in production of a creative product, and so it is not something specific to my class, but to this part of the core as a whole. I was fascinated (and dismayed) to discover that some longtime music professors actually objected on principle at one point to the very notion that students who were not music majors could meaningfully undertake something like this. Certainly for many it would be “amateurish” – but if one does not see the value of pursuing not only the arts but also the sciences and the humanities at all levels, even if it is not one’s major, then one simply does not get the liberal arts and thus the mission of our university, and the rationale for having a core curriculum in the first place. Thankfully these views seem to be or have been held by a very tiny number of people, most or all of whom have since retired or will do so soon. The culture of the institution seems to be moving in positive directions, and when I heard my colleague Richard Auldon Clark speak to prospective music students about the value of being broadly educated in the manner the Butler emphasizes, rather than focusing solely on music in the way a conservatory education would, I found it truly inspiring. Most of my colleagues get the value of combining breadth and focus, and contribute to offering both kinds of experiences to our varied students.

Coming back to the theme of this post, the point I try to make from the creation stories is in relation to the act of human creativity. Creation in the Bible is depicted as the bringing of order to chaos, of form to already-existing raw materials. One could also ask what language God is to be imagined as speaking in commanding light, the firmament, and living things into existence. Human languages are not eternal. And the very creation stories themselves in the Hebrew Bible are transformations of already-existing stories and concepts.

When the notion of creating something original seems too daunting – whether it be a piece of research or a piece of music – it is helpful to remind ourselves that creation rarely if ever involves something completely new. Even mew musical instruments tend to be patterned on older ones. Schoenberg broke with traditional tonality, but the twelve notes he used were those that composers had been using, just ordered differently (although to some it was misperceived as the opposite of creation, turning order into chaos). The most original band the students could think of was Snarky Puppy, but they are still doing something that is innovative within the framework of a recognizable musical tradition and language. So too when writing, we do not need to invent a language – we organize existing words, and we draw on the ideas of those who have gone before us even when we do not realize we are doing so, as well as when it is obvious or even deliberate.

I’m not sure how helpful or reassuring the analogy is. But I do think the depiction of divine creation in the Bible gives us insight into the act of human creation, musical or otherwise. Theologically, some would say that that is because humans resemble their Creator precisely in our own creativity. Viewed historically, on the other hand, the depictions of divine creation in the Bible are patterned on human creative activity. But either way, they can provide a helpful basis for discussing the fact that, within the context of my class, their original creations are expected to draw on existing words and music.

For some, at least some of the time, that understanding of what it means to be creative can be freeing, much as any constraint may inspire creativity in a way that a completely blank canvas does not… 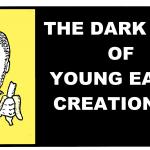 May 8, 2018 Thank God for The Handmaid's Tale!
Recent Comments
4 Comments | Leave a Comment
Browse Our Archives
Follow Us!