I previously shared a quote from Robert Weston that is worth revisiting. Here is a small part of it:

Doubt is the touchstone of truth; it is an acid which eats away the false.
Let no one fear for the truth, that doubt may consume it; for doubt is a testing of belief.
The truth stands boldly and unafraid; it is not shaken by the testing;
For truth, if it be truth, arises from each testing stronger, more secure.
Those that would silence doubt are filled with fear; their houses are built on shifting sands.
But those who fear not doubt, and know its use; are founded on rock.

The point is one that I myself have made many times before: doubt is healthy and indeed essential. Fear of doubt indicates that one prefers the comfort of believing one is right to the harder possibility of being wrong and having to rethink things. That fear goes hand in hand with the rhetoric of the slippery slope that conservatives abuse so effectively. “What if you’re wrong?” is offered as a challenge to others, but they never ask themselves, “What if you’re wrong to cling with such certainty to your beliefs despite your human fallibility? What if you are wrong to exclude others as heretics and/or sinners despite God’s wide mercy and compassion, not to mention God transcending all that we could ever hope to understand or describe?”

As Peter Ustinov once said, “Beliefs are what divide people. Doubts unite them.”

If we could all be united in doubt, in the recognition that we all have convictions and indeed certainties, but none of them deserve to be held as certainties, not necessarily because of any shortcomings in those things we believe, but because of shortcomings in ourselves, what a radically different religious and ideological landscape we’d find ourselves in! 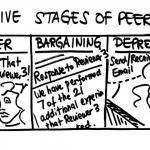 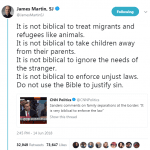 June 16, 2018 Woe To Those Who Make Unjust Laws
Recent Comments
17 Comments | Leave a Comment
"Thank you so much for the encouragement!"
James F. McGrath Evangelicals and the Big Lie
"I think I can speak for all of us that we really appreciate all the ..."
John MacDonald Evangelicals and the Big Lie
"Thanks. I can't wait to share the full cover. Soon..."
James F. McGrath What Jesus Learned from Women Cover ..."
"Looks really good!"
Phil Ledgerwood What Jesus Learned from Women Cover ..."
Browse Our Archives
get the latest from
Religion Prof: The Blog of James F. McGrath
Sign up for our newsletter
POPULAR AT PATHEOS Progressive Christian
1