Via both Ancient World Online (AWOL) and the Biblical Studies Blog, I learned about the Open Access Digital Theological Library This is a useful search engine for finding open access materials related to theology and religion. It is mostly a portal that curates materials in other sources such as Hathi Trust, and a number of those sources can be found elsewhere, such as the Internet Archive and Google Books. Nonetheless, I want to highlight this resource since it shows how important curation of this sort is in an era when the internet has turned into something that is like a giant library, but without either the card catalogue or the helpful staff. Searching through the Open Access Digital Theological Library, I came across a work that records a published conversation Ovid Butler had with a defender of slavery. Ovid Butler is of course the abolitionist who founded North Western Christian University, which was later renamed Butler University in his honor.

Here is a brief excerpt from the work:

The argument is capable of being presented in the form of a syllogism, and I will endeavor, by reversing the order in which it was stated,
to so present it now.

The first and major proposition in the syllogism may be stated as follows : – >
The Lord Jesus commanded that ” all things whatsoever ye would that men should do to you, do ye even so to them.”
The second and minor proposition may be stated thus :
The love of liberty is an intuition—an instinct of humanity. Above and before all logical reasonings, each one desires for himself personal freedom, and rejects and repels, as most abhorrent to his nature, the idea of being made a slave, and held in bondage, subject to be used, controlled, and disposed of, as property, by any other human being.

These two propositions are the premises of the argument. The conclusion to be deduced from these premises is :
That to deprive a human being of liberty, to reduce him to slavery, and hold him as property, subject to be used, controlled, and disposed of, as other property, is a transgression of the law of the Lord, embraced in the first proposition, and consequently sin. This conclusion is the inevitable sequence of the premises ; and if there be no error, no defect in either of the propositions, the argument proves beyond doubt or controversy, that ” slavery is sinful.” 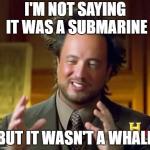 July 31, 2018 Jonah and the Ancient Aliens’ Submarine
Recent Comments
2 Comments | Leave a Comment
Browse Our Archives
get the latest from
Religion Prof: The Blog of James F. McGrath
Sign up for our newsletter
POPULAR AT PATHEOS Progressive Christian
1