A post on the blog Friendly Atheist noticed that young Evangelicals are less conservative than their parents, and more importantly, more open to nuance, to being conservative in some areas and less so in others.

But the post unhelpfully treats this in a manner that parrots a key element of the conservative Christian script, characterizing this as a shift away from a brand of Christianity that gets to be considered normative, namely conservative Evangelicalism.

But if you’ve ever listened to a conservative Christian version of church history, it is always the story of a small minority who supposedly get it right, maintaining and standing up for “orthodoxy” and “the truth” while the majority wander into error.

But what if the story being told is badly biased by the tellers? What if they are right that there was always a small minority that was narrow and that saw things in a manner similar to the way they do, but wrong to say that those individuals were the faithful few while everyone else was badly mistaken?

It’s the same story, just told from a different perspective.

Of course, there are conservative Christians who pretend to embrace the idea that the evidence (usually from science, but sometimes from history) doesn’t speak for itself, and so different interpretations of it are simply a matter of perspective.

But when people study science (or the Bible) without being kept in a sheltered environment that limits the information, options, and perspectives they are exposed to, they typically reject both science denialism and fundamentalist dogmatism.

And so once again I will appeal to everyone not to simply grant to fundamentalists and conservatives the right to define how the story of the church (past and present) is told, and who was right and wrong in it.

It is always good to look for and listen to a minority report. But it is also important to ask why most people don’t embrace it. That most people are hard-hearted stubborn sinners is not the only possible explanation… 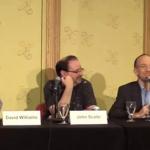 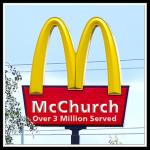