Greenish Darth Vader and the Myth of an Unchanging Original Text

Another illustration that emerged from my interaction with students at McCormick Theological Seminary had to do with the notion of an unchanging “original text” that we seek to get back to, or which we remember with nostalgia while rejecting things that we perceive as unpleasant or inappropriate changes or additions to it.

But that is an illusion, both in religion and in fandom.

The idea that we can get back to a pristine original version of what Jesus said, or of Christianity, or of a Bible, or of what the biblical texts meant, is as misguided as the idea that we can watch the original series of Star Trek, or an unrestored and unremastered version of the first Star Wars movie, and revisit our authentic experience from our younger days, before people tampered with them to issue Blu-Ray special editions. The unimproved special effects on Star Trek will not impact us now, having watched much more advanced techniques for half a century since the shows first aired, the way they did then. And if the celluloid filmstrip is not remastered, Darth Vader has a greenish tint (I mistakenly remembered it being purple when speaking to the class – there’s an illustration in that, too, I am sure!).

In the same way, we imagine the past through white unpainted Greek and Roman statues and excavated ruins, never able to see, experience, or really imagine what these ancient things were like in the time they were made, or the impact they had on people then.

And even though we think we are reading “the Bible” “as it always has been,” there isn’t even a single thing called “the Bible” but constellations of mostly-overlapping lists of tables of contents, encompassing texts in another language that even those of us who’ve studied them cannot read as though one of the languages was our native one.

One of the ways reading science fiction and the Bible in conversation with one another can be helpful to both is through questions raised at the intersection. How does the desire to experience epic science fiction the way the original audience did, or the way we first did, relate to the effort to understand the Bible the way its first readers would have, or in dialogue with the way we did when we were younger? And which is more difficult, to imagine aliens that are genuinely different from us, or to grasp the similarity and difference of ancient humans and the meaning of their literature to them? 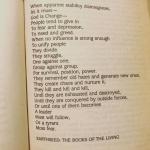 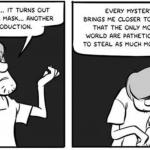