Doctor Who: The Tsuranga Conundrum

The episode The Tsuranga Conundrum finds the Doctor and team scavenging for something she needs, when they encounter a sonic mine. They end up in a hospital. As they look for the exit, they find General Eve Cicero. The Doctor knows her – she is mentioned in the Book of Celebrants. The Doctor has a volume rather than a chapter about her. It turns out they are on a ship called the Tsuranga, and so they are on their way having left the TARDIS behind, heading to Rhesus 1. The ship is automated, and so there is no crew that the Doctor can reason with. One of the two medical crewmembers on the ship, named Astos, helps her to realize that she is being selfish trying to take charge of the ship and turn it around. It is striking that we automatically sided with the Doctor as viewers – we should recognize that the Doctor is fallible, and that when injured might not be thinking straight. But nonetheless she does take charge to the extent she can, as the ship is breached. As they each investigate separately, Astos is tricked into entering a lifepod, which is then jettisoned and blown up with him inside.

The creature that has infiltrated the ship is a pting. It isn’t known whether they occur naturally or were created, but they eat all inorganic matter and are thus lethal, despite not eating organic material. They are also lethal to touch.

As Yaz and Ryan talk to a member of another species – a male that is carrying a baby, with a very fast gestation period. Ryan realizes that person is the same age he is now, and the age his father was when he had him, which helps him to understand his father’s distance from him in a new light.

At one point the Doctor lists the things that she is a doctor of, which includes philosophy, people, and hope. She asks what the pting wants, something no one else asks. The general says that she encountered a pting once – it massacred her fleet.

The Doctor learns they are in the 67th century. She explains to Yaz that the ship’s antimatter drive is like the iPhone version of CERN. The Doctor talks about how much she loves it, and what it represents: using antimatter to transport matter – including people – across vast distances.

It turns out that Eve Cicero has a condition known as “pilot’s heart.” As Eve’s brother, an engineer, rigs an improvised bypass so that Eve can take control of the ship, the Doctor realizes that the pting is after energy, that that is what drew it to the ship, and what explains its behavior since boarding. The Doctor also figures out how the ship would be detonated if it is detected as deviating from its course. She uses the bomb to attract the pting – which is able to absorb the blast after eating it. The Doctor then ejects it into space, well fed. In the midst of the banter, there are pop culture references to Hamilton – all 900 casts – and Call the Midwife.

Ronan decides to name his baby in honor of Ryan and Graham. Since they are from Earth, he chooses the name of a famous Earth hero he learned about in school. But it is possible that the Giftan history books may have some details wrong, in which case Avocado Pear was perhaps not a great hero.

Eve dies in her effort to pilot the ship to Rhesus 1. Her android consort leads the others in a commemoration of her life, “incanting” being the term they use for this (I initially thought they said “encamping,” as you can see from the comments below, which puzzled me greatly). The words they utter are: “May the saints of all the stars and constellations bring you hope as they guide you out of the dark and into the light, on this voyage and the next, and all the journeys still to come, for now and evermore.”

The episode provided potential engagement with religion in the Doctor’s determination to make sense of the pting’s behavior as something other than senseless destruction and murder. But at the end, it offered something even more direct than that, in the form of a prayer, shared by beings from multiple planets, and led by an android. What did you think of that ending, laden as it was with such religious significance? And what did you think of the episode as a whole?

As an aside, I didn’t make it to Doctoberfest at WhoNA this year, and so I was glad to see this video… 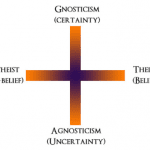 November 6, 2018 #CFP Bible and Science Fiction
Recent Comments
12 Comments | Leave a Comment
"The core confusion of this article it seems to me is precisely the conflation of ..."
arcseconds We All Believe
"Count Iblis! Wow, who knew?Even when I was a lot more right of center religiously ..."
Phil Ledgerwood Criticism and Fanaticism
"It most certainly has been and continues to be!"
James F. McGrath A Call to New and Lapsed ..."
"I don't know if my blog has ever been on your list, but I did ..."
Phil Ledgerwood A Call to New and Lapsed ..."
Browse Our Archives
Follow Us!

Criticism and Fanaticism
As someone whose life’s work is dedicated to studying things I love,...
view all Progressive Christian blogs
What Are Your Thoughts?leave a comment
Copyright 2008-2020, Patheos. All rights reserved.