This week’s episode of the ReligionProf Podcast features Ken Derry who, along with John Lyden, edited the new book The Myth Awakens: Canon, Conservatism, and Fan Reception of Star Wars. The book is published by Cascade, an imprint of Wipf and Stock. The incredible thing about it, the thing that I couldn’t believe when it was pointed out to me and yet must acknowledge is true, is this: this is the first complete volume focused on Star Wars undertaken from the perspective of religious studies.

Seriously, look into it. There have been lots of Star Wars devotionals, uses of Star Wars to illustrate theological and spiritual traditions, but no volume that was about Star Wars using the secular tools of religious studies.

My reaction was akin to Luke Skywalker’s in The Empire Strikes Back: “No…it’s not possible!”

But following advice akin to that of Darth Vader’s, I searched my bookshelf and found it to be true.

And so of course, that leads to a follow-up question: How did we miss this? It is certainly a great illustration of the fact that, if it can be hard to notice what is there, it is harder still to notice what is missing.

Now that the gap has begun to be filled, I am sure you will share my excitement about this book – and the others that we may now hope will follow in its footsteps. What new books on Star Wars from the perspective of religious studies do you hope someone will write in the near future?

Of related (but clearly theological) interest, see Erin Wathen’s post on “The Gospel according to Star Wars.”

Since The Myth Awakens was inspired by the controversy over non-white and non-male heroes in the most recent Star Wars movies, I also need to link to the evidence that a significant amount of that controversy was driven by bots. And that in turn connects this post with another of my research areas, the intersection of computing and ethics. Bots drive a lot of conversation about news, beyond Star Wars. See too the recent First Monday article about Star Wars.

I will also add that I was especially delighted that there was a musicological element included in the book. I thought a musicologist was essential when I put together Religion and Science Fiction, too. IO9 recently shared one of the beautiful melodies that John Williams composed for for Star Wars: Attack of the Clones, arranged for violin solo and orchestral accompaniment, namely “Across the Stars.” The video they shared has since been removed for copyright infringement. But here is Anne Sophie Mutter’s actual concert performance of the piece:

And here is the video that YouTube’s AI knew I would want to see and kindly played for me after I finished watching the above – John Williams’ new arrangement of Han and Leia’s theme music, another of my favorites:

If you’ll be at AAR/SBL in Denver, you’ll definitely want to swing by the Wipf and Stock section (calling it a “booth” is inadequate, given how extensive it is) to pick up a copy of this important book! 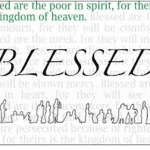 November 13, 2018
Poor In Spirit and Poor in America
Next Post 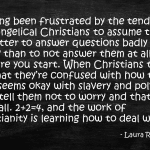 November 15, 2018 It is Better to Live with Questions than Give Bad Answers
Recent Comments
3 Comments | Leave a Comment
"What a fabulous poster."
Scurra Christianity and Science Fiction Conference
"Wow, this generated a lot of discussion ..."
Sandy Plage Responding to Richard Carrier’s Response to ..."
"Yes 'John' has some kinda problem with the ioudaioi, i.e. the Judeans,,that's the point, meanwhile ..."
Mark S “To Your Tents, O Israel!” A ..."
"Haha I see, the Junia-Joanna material fits very well with our Benjaminite's sojourn in 'Arabia'!The ..."
Mark S “To Your Tents, O Israel!” A ..."
Browse Our Archives
get the latest from
Religion Prof: The Blog of James F. McGrath
Sign up for our newsletter
POPULAR AT PATHEOS Progressive Christian
1

Are Twisties Like the Yips?
American GOAT gymnast Simone Biles surprisingly withdrew from the Olympics yesterday, saying...
view all Progressive Christian blogs
What Are Your Thoughts?leave a comment
Copyright 2008-2021, Patheos. All rights reserved.