It was interesting recently to read well-known words from 1 John with the story in John 9 fresh in my mind, as happened to me a while back when I reached the story in John 9 in my Sunday school class. In John 9 (as J. Louis Martyn famously highlighted) we are given a glimpse into the experience of expulsion from a community that the author and earliest readers of the Gospel underwent. The letters are thought to be from that same community. And so do the words in 1 John, “perfect love casts out fear,” not take on added poignancy when we recognize their similarity to the language of being cast out of the synagogue, and then again to the promise of Jesus that those who come to him he will by no means cast out?

Not long after, I also had the opportunity to reflect on the extent to which John 10 is not in any sense a distinct discourse from what is in the preceding chapter. And that helps to answer an important question, namely who the phrase “those who came before” had in mind. They are, in context, leaders like those who expel the newly-sighted man, who care nothing for sheep such as him. Recovery of sight in any human being ought to be a reason for rejoicing. If one cannot bring oneself to do so because of concern for boundaries that one has erected between communities, then one deserves to be harshly criticized.

I presume I needn’t go into detail about the relevance of this message for today. That is self-evident. The real challenge is not to respond in a manner that merely perpetuates the process of expulsion and making outcasts of others…

Keith Giles spoke a while back about love as a force stronger than fear, even though many (including many Christians) treat it as though it were not. And also of related interest:

Who Gathers the Outcasts 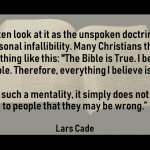 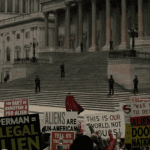