It was quite a while back that I watched Batman vs. Superman. But I have had a draft blog post saved since then, because there was so much in it that I wanted to comment on. Then I heard that there might be plans for a conference about Batman and theology, and thought it was high time to share my thoughts and impressions. But even then it took me longer than it ought to have. I trust, however, that these superheroes are of such perennial and persistent interest that this post will still be worth sharing.

What struck me most was how much religion was woven throughout the movie, not in merely superficial ways but in substantive ones. There was the prayer from the Wayne Industries manager in the face of impending destruction early on, as his floor is being ripped apart by the battle between Superman and General Zod.

A tribunal witness says that Superman answers to no one, “not even I think to God.”

Meanwhile as Batman saves imprisoned women from a sex trafficker: “It saved us. A devil.”

There is reference to gods as hurling thunderbolts.

Lex Luthor is doing research on “gods among men,” the “meta-human thesis” that amazing human beings exist among them.

A man injured in the Wayne Enterprises building collapse spray paints “False God” on a statue of Superman in Heroes Park.

Lex Luthor proposes turning a painting upside-down because he says, “We know better now. Devils don’t come from hell beneath us. They come from the sky.” And later, “Don’t invent a conspiracy to put back his halo.” Luthor tells the story of Prometheus.

Vikram Gandhi comments on religions and messianic figures in relation to Superman, pointing out that we have always projected our values. Maybe he isn’t a devil or Jesus but just a guy trying to do the right thing.

Lex Luthor also says that the oldest lie in America is that power can be innocent. He says that “God is tribal” and “God takes sides.”

I was particularly struck by the sign someone is carrying at one point at a protest: “You can’t be Christian and pro-alien.”

The classic conundrum is brought into the picture: if God is all powerful then he cannot be all good, and vice versa.

Eventually when it becomes clear that Lex Luthor set up the fight between Superman and Batman, he explicitly thought of it as “God vs. man.” Luthor kidnaps Martha Kent, presenting Superman with the choice, “Kill the bat, Martha lives.” He adds, “And now God bends to my will.”

In view of the discussion of Superman as God, the line “Mother of God, will you look at the time” is presumably a deliberate double entendre.

Some parts of the dialogue engage with questions of Superman’s divinity on an implicit level: “You’re not brave. Men are brave.” And then, “I bet your parents taught you that you were here for a reason. Mine taught me a different lesson…the world only makes sense if you force it to.” But it eventually becomes more explicit: “You were never a god. You were never even a man.”

Eventually they find common cause in the desire to save a human being: “Find him. Save Martha.”

Luthor says, “if a man won’t kill God, the Devil will do it.”

He then creates a Kryptonian monstrosity using his own blood.

When nuclear missiles are fired, an officer crosses herself, with the statement “God have mercy on us all.” It is with this instinctive religious response to destruction and impending loss of life that the religious aspects of the movie are bookended, since the prayer in the face of the power of the battle between the two Kryptonians – every bit as destructive as nuclear weapons – was where it started. Of course, one might also count the hint of the possibility of a resurrection at the very end.

Assuming you’re willing to comment on this movie so long after it was released, what are your thoughts on its theological themes? 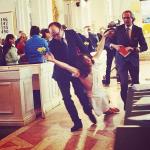 February 9, 2019
Perfect Love Casts Out Fear From Outcasts
Next Post 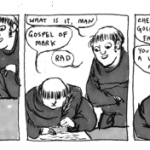