The Owner of the Donkey and the Need of the Lord

There is a double entendre in Mark 11:3 and its parallels, in phrasing that remains fairly consistent across the Gospels, perhaps for that reason. The Greek text says  Ὁ κύριος αὐτοῦ χρείαν ἔχει, which is usually translated in one of the two possible ways that it could be, “The Lord has need of it.” But the reader of the text in English may miss the other possible meaning of the Greek text. The word that means “of it” comes after the word “lord” and the word κύριος, usually translated with “lord” in this passage, also indicates an “owner” (see for instance Matthew 20:8 as one example of this within the New Testament). The result is that the same phrase could equally mean “the lord has need of it” and “its owner has need.” This double meaning is clearly intentional. It remains a very interesting question what (if anything) this indicates about the scenario, whether on the level of the Gospel narratives or in a possible historical event lying behind the texts. Did Jesus make prior arrangements and have a donkey ready for his use, with a prearranged signal to those charged with tending it? Did Jesus supernaturally know about and gain possession of a donkey that belonged to some random person living in this area? Or did Jesus use a pun to get his disciples to, in effect, steal a donkey for him, instructing them to say something if questioned that would make it sound as though the owner of the donkey had sent them, when in fact their Lord was not the donkey’s owner?

Craig Evans’ commentary shows awareness of these possibilities and discusses them and even others.

What’s your impression of this text? Did you read it on Sunday? Did you read it in Greek even if the congregation you were in was reading it in English? Did you notice the double entendre, and assuming you agree that the Gospel authors intended for there to be two ways of understanding the text, what is your impression of what Jesus and/or the Gospel authors intended? 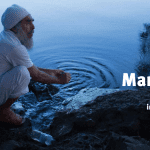 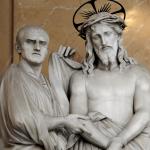