The editors are currently soliciting abstract submissions for an edited volume focusing on Transgressive Women in Speculative Fiction.

The interconnection of speculative fiction, transgressions against social norms, gender studies, and global perspectives is compelling because speculative fiction allows for a unique approach to social critiques. The worlds that are created in science fiction, fantasy, horror, and dystopian futures allow the genre to explore new or imaginative societies, detached from existing or historical social structures. Such an environment of speculation has led many authors to utilize the genre to comment on women’s concerns. Many of these works have, understandably been extensively critically examined.

Exploring the conversation further, the editors solicit critical approaches for our anthology that examine female characters in contemporary writers of speculative fiction, film, or digital media who are underrepresented in present scholarship, emphasizing the global reach of speculative fiction. We specifically request essays that examine female characters who operate outside social norms (either real world norms or those of their created cultures) and whose transgressive behavior is transformative and critically interesting. We are NOT accepting critical explorations of well-known authors or film makers who have already been the focus of significant critical work.

Facets of transgression may include gender performance and breaking bounds of gender normativity; issues regarding motherhood, reproduction, and other-mothers; enacted or experienced violence; non-heteronormative, non-monogamous sexuality; the questioning or embracing of religion; and any behavior which breaks, bends, or questions other social paradigms.

Our intent is that this anthology will contribute to an understanding of global uses of speculative fiction as a prism for examining the intersectionalities and problematization of race, class, ethnicity, gender, and sexuality, concentrating on characters who engage women’s concern and female-identified characters including transgender women, androgynes, queered, or transgressive gender.

The anthology will be divided into overarching themes of gender performance and sexuality; violence and peace; identity formation and othering; and mothering, reproduction, and other-mothering. Of particular interest are genres such as anime, manga, horror, and steampunk. Works by newer authors are highly encouraged.  While essays that engage these topics are solicited, other considerations of transgressive female characters in speculative fiction are welcome, as are email inquiries to the editors.

We are particularly interested in submissions that deal with (1) the preceding list, (2) interplays between print and media adaptations of a work, and (3) the following topics:

The Man in the High Castle (book or TV series)

In no way should this be considered an exhaustive list. Particularly engaging ideas about underrepresented creators in fiction, film, and all digital media from any locale are encouraged.

Abstracts should be no longer than 350 words and accompanied by a current CV. Preference will be given to abstracts received by November 25, 2019.  Authors will be notified by December 15, 2019, about the status of their proposals. If your abstract is accepted, final manuscripts of 6,000-8,000 words should be submitted in MLA style by May 1, 2020. 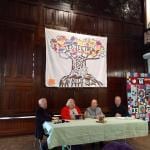