How Times Have Changed

It is easy to forget that not that long ago, religious and political stances aligned themselves very differently. As a case in point, Jim Burklo looks at William Jennings Bryan, most famous for his role in the (in)famous Scopes Trial. Here is a lengthy excerpt from an even longer piece that is just fascinating:

Does that idea hurt your head?

Let’s scroll back to July of 1925 in Dayton, Tennessee.

Sweat ran down the high dome of his bald head as he declaimed against the threat posed to civilization and Christianity by the teaching of the theory of evolution in public schools. The days of what became known as the Scopes Monkey Trial were long and hot. And the media attention was heavy. The lawyer defending fundamentalist six-day creationism was William Jennings Bryan. His prime as an iconic American political figure had long passed. This was his last stand. And firm he stood, his arguments eloquent, cooling himself with a big hand fan as he made his case. In the end, the teacher accused of promulgating the offending theory was fined $100. Bryan won the battle.

But he lost the war. He and his fellow fundamentalists were widely mocked as country bumpkins, out of touch with the forward march of science and culture. Bryan died shortly after the trial. The Scopes case was later nullified on a technicality, and the teaching of evolution in schools rapidly spread throughout the country. Fundamentalism in America went into a long period of relative quiescence.

And then it came roaring back into public significance. And the evidence of its resurgence is abundant today. The Attorney General recently gave a speech at Notre Dame University, repeating the right-wing trope that there is a “war on religion” – specifically Judeo-Christian religion – in America waged by progressives and secularists who are to blame for the country’s ills. I am a very religious person and feel no threat whatsoever to the practice of my faith.   So why is this fear being stoked when the Cabinet is heavily populated by the same kind of fundamentalist Christians that prevailed in the Scopes Monkey Trial? How can William Barr whine at Notre Dame about a threat to his faith when a majority of the justices on the Supreme Court are Catholics?

The answer to this conundrum is found in a study of American history since the days of William Jennings Bryan. Opposition to teaching evolution in public schools translated into a distrust of taxpayer-subsidized education generally.   There is a straight line between the Scopes Monkey Trial and Betsy DeVos, “ScAmway” heiress and privatizer-in-chief of the nation’s schools. Many of the folks who opposed the teaching of evolution in public schools were also white racists. In the 1970’s, when Bob Jones University lost its tax-exempt status because it did not allow interracial dating, the court decision stirred evangelicals to political action. The Republican Party married itself to this demographic, stirring up fundamentalists against this supposed governmental over-reach. The consequences have endured, with our current president getting overwhelming support from white evangelicals. The struggle of fundamentalist Christianity with secular culture was cynically co-opted as a tool for radicals to dismantle government – and now to dismantle democracy itself.

But this same demographic, in the late 19th and early 20th centuries, voted for a self-professed democratic socialist by the name of William Jennings Bryan. He was nominated three times for the presidency by the Democratic Party. He gave the unforgettable speech at the Democratic convention of 1896 in which he railed against the capitalist class for imposing an inflexible gold-standard fiscal policy that ruined farmers around the country. “You shall not crucify mankind upon a cross of gold!” he roared, and the crowd literally went wild. He railed against the excesses of the “robber baron” capitalists of the Gilded Age. He was called the “Fundamentalist Pope” for his unabashed employment of religious language in support of leftist political positions.

I just finished his slim 1909 volume, “The Prince of Peace” – more a tract than a book, outlining his personal faith convictions, with his political views implied.   As a progressive Christian, I would dispute many of his theological assertions. But I found myself having great admiration for the commitments that underlay them.   His main objection to evolution was that “survival of the fittest” was in contradiction to Jesus’ law of love. Now we know that the law of love is woven into nature, and has “survival value” for populations. But in his time, this wasn’t understood. “The Darwinian theory represents man as reaching his present perfection by the operation of the law of hate – the merciless law by which the strong crowd out and kill off the weak.” Indeed, at the time he wrote, many “mainstream” cultural figures were abusing the theory of evolution in support of “eugenics” and untrammeled capitalism. It was a handy scaffold upon which to promote the idea that the economically successful were exemplars of the natural “survival of the fittest”.

So it is intensely ironic that, today, so many of the people who still believe in six-day creation have allied themselves with the politics of untrammelled, “winners take all”, social-Darwinist capitalism…

I’m sure you’ll want to read the rest.

What Do Dairy Cows’ Y Chromosomes Have to Do with Young Earth Creationism? Plenty.

You Were in Eden (RJS)

And here are posts and reviews related to a book that I meant to blog and/or have a podcast about, namelys Samuel Bray and John Hobbins on Genesis 1-11:

Christian Century (with another comparing it to John Goldingay’s) 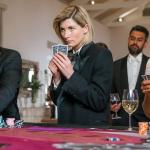 January 6, 2020 Doctor Who: Spyfall
Recent Comments
0 | Leave a Comment
Browse Our Archives
get the latest from
Religion Prof: The Blog of James F. McGrath
Sign up for our newsletter
POPULAR AT PATHEOS Progressive Christian
1