The End of The Good Place

Now that the finale to the series The Good Place has aired, there is so much reflection that deserves to be offered. I hope this will be a series we’ll continue to talk about, because it has real depth to it, both philosophically and emotionally.

I might be biased. I’ve watched many recent episodes, and watched the series finale, together with my son. And so that may have primed me to react in certain ways. But I think I would have felt a lump in my throat when Tahani and her sister were comfortably enjoying one another’s company in the afterlife, and then their parents show up, having been through the new system, and they are very expressive of their love for them both, and eternally sorry.

And yet, this soon gets us to the key theme of this episode as of the previous one. Even when one has spent a lifetime longing for parental affection and approval and not receiving it, an afterlife that sets matters right and includes those parents genuinely expressing that love will eventually become tedious.

I wondered where the series was headed, what its ultimate conclusion might be. When it recognized that it required numerous repetitions of lifetimes for the main characters to make progress, and later took Chidi remembering those many lifetimes to find a solution to the problems with the afterlife in its current form, I thought the overall message might be in keeping with Hindu philosophy, emphasizing reincarnation as the solution. And to some extent, that can be part of the overall picture.

But ultimately even progress, even success, even fulfilment and having everything we ever wanted could become tedious and boring.

And so there is a need for a way to choose extinction, an end to that process.

That’s the Buddhist critique of and response to Hinduism, and so perhaps it is appropriate that that is where things ultimately end up. But I still love the way they got there. And I hope it will lead to discussions among other religious groups. The endless existence of the ego has been the ultimate goal for a very long time in some traditions, so long that few stop to ask whether it should be, whether it has to be, whether anyone would really be happier or the universe would be a better place as a result.

There are lots of references to spirituality and spiritual things in this episode. Thomas Aquinas and Rabi’a the Sufi mystic both get into the Good Place. I was happy that these figures got a mention. But Christianity and Islam take a back seat to Buddhism in the episode, with its emphasis on the ultimate state being one of ending the experience of ongoing cycles of existence, not necessarily choosing absolute nothingness, but choosing what Buddhist authors have compared to being a wave crashing back into the ocean. Our illusory self vanishes, but whether that should be thought of as us “not existing” may reflect a problematic framing of things.

Nathan Campbell suggested (after I wrote this initial post) has suggested that the reason choosing extinction seems desirable is because God is absent from the Good Place. That may be so. The only thing that would supposedly satisfy for eternity, according to the great mystics, is the beatific vision, the enjoyment of the divine presence. Perhaps that is something we’d never grow tired of. But either that is because it provides a reality of constant change and development that never ceases to fulfill the way all other human pursuits do, or it is because we ourselves cease to be changing entities and become something static ourselves. The latter possibility is not that far from the vision of The Good Place. Perhaps eternal life is timeless existence rather than endless existence, ceasing to perceive the illusion of time and getting beyond it. The former suggests that The Good Place offers an important critique that theists should consider, and also that theists may have something to say in response.

I won’t dig further into these topics here. The Good Place invites us to discuss them, rather than claiming to provide a definitive philosophy. Indeed, it suggests that the Good Place itself, and the system that gets one there or keeps everyone out, may require redesign and revision. The same has to be true even more so when it comes to our systems of thought about afterlife. Not knowing for certain, the show says, is the most fundamentally human thing there is. And biblical authors like the Book of Job suggest that not knowing we’ll be rewarded or punished may be crucial to our becoming truly moral, rather than doing what we think is good out of a self-defeating self interest. I plan to return to these topics again in the future. Ongoing reflection seems the only appropriate response to the show, as to the subject it brought into public consciousness and provided a grounds for discussing more opening than most people tended to, although some of us in philosophy, theology, and related fields have never stopped pondering these matters.

My son the composer and I were struck by the music featured at one point in the episode, which I immediately identified as by Argo Pärt, his work “Spiegel im Spiegel” representing his move in the direction of what has been called tintinnabulism and also “spiritual minimalism.” It was perfect music to include in this episode. After the episode ended, I looked up the piece and we listened to it again. As we did so, our TV kindly switched to a screen saver featuring family photos of some of our most meaningful trips to other locations and visits here from relatives. We listened, meditated, reflected on the episode. And when it was over, we both looked at one another, hugged, and affirmed that neither of us is ready yet to go through the door just yet.

The Good Place is a comedy, and yet it is profound, and as I said, I hope we’ll continue to talk about it for a long time to come. It has a lot of substance to it.

There is a lot of discussion elsewhere. I love that Meredith Warren not only shared her thoughts on the series and its finale, but immediately thought of the Testament of Abraham. But also see what is on IO9. They shared this, which you absolutely should watch:

What did you think of the series as a whole, and of the finale? 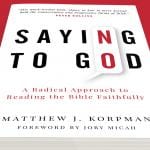 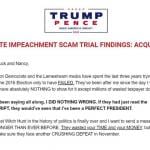 February 7, 2020 A Perfect President and His Christian Supporters
Recent Comments
0 | Leave a Comment
Browse Our Archives
get the latest from
Religion Prof: The Blog of James F. McGrath
Sign up for our newsletter
POPULAR AT PATHEOS Progressive Christian
1