Ancient aliens is pseudoscience and science fiction. Ancient robots is something else. Adrienne Mayor writes about her recent book Gods and Robots: Myths, Machines, and Ancient Dreams of Technology:

Who first imagined robots? Most historians believe that automatons were first developed in the Middle Ages. Some philosophers of science claim that it was impossible for anyone in ancient times to imagine technologies beyond what already existed.

Other scholars assume that all animated beings in mythology were inert matter brought to life by gods or magic, like Adam and Eve or Pygmalion’s ivory statue. But I wondered, was it possible that the concepts of robots could have been imagined in classical antiquity, long before technology made them possible?

I found descriptions of imaginary automatons as early Homer, more than 2,500 years ago, in a remarkable group of Greek myths. Robots, synthetic beings, and self-moving devices appear in myths about Odysseus, Jason and the Argonauts, the sorceress Medea, the bronze automaton Talos, and Pandora. The stories envisioned ways of replicating nature by a process of bio-techne, “life through craft.” These beings were not simply inert matter brought to life by magic or a god’s command. Ancient poets describe the artificial entities as “made, not born,” to emphasize their technological, non-biological origins.

So, thousands of years before medieval and early modern machines-and centuries before innovations of the Hellenistic era (fourth century to first century BCE) produced real self-moving devices-ideas about creating artificial life were being explored in imaginative thought experiments, set in an alternate world where technology was marvelously advanced. My book, Gods and Robots: Myths, Machines, and Ancient Dreams of Technology, delves into the earliest expressions of the desire to create artificial life, from the age of mythology to proliferation of real automatons in Alexandria, Egypt.

Read the rest of her article on the ASOR website. 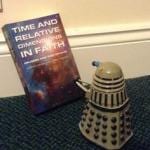 March 26, 2020
Doctor Who in the Context of Pandemic
Next Post

March 28, 2020 Some Psalms
Recent Comments
0 | Leave a Comment
"I love this article. Social media has shown me some very disappointing sides of certain ..."
Phil Ledgerwood Christians and Internet Rumors
"I was taught that "Amen" means something different than 'you may be seated. There are ..."
Deborah Harding The “Original Aramaic Lord’s Prayer” is ..."
"These are great points. What I appreciate about the article is that we tend to ..."
James F. McGrath We All Believe
"Thank you. And thanks to the SBL for that statement."
Neil Rickert Statement on Black Lives Matter, Right ..."
Browse Our Archives
Follow Us!

The Last Battle (A Poem About Narnia)
We were trapped in A stable that was Burning and it Seemed...
view all Progressive Christian blogs
What Are Your Thoughts?leave a comment
Copyright 2008-2020, Patheos. All rights reserved.