Doctor Who in the Context of Pandemic

Doctor Who in the Context of Pandemic March 26, 2020 James F. McGrath

While it often happens even under normal circumstances, at the moment it is difficult to Google anything related to “Doctor Who” the television show and get results on that subject. Instead, the results are about the “doctor who” did this or that, some sacrificing their lives as they took care of patients suffering from the effects of Covid-19. You should read those articles. But if you’re interested in the television series as well, then what?

There is perhaps no better time to rewatch the full extent of the classic series of Doctor Who than when we are ordered to stay at home except for absolutely essential activities in the midst of a pandemic. For one thing, it can easily keep you occupied for an entire month or more, and that’s if you don’t take breaks to sleep. But Doctor Who offers something more than just a lot of episodes to fill the time, even if you limit yourself to a mere 50 of your favorite episodes. Global pandemics, isolation, mass hysteria and panic, and many other things that concern us right now are featured plot elements in episode after episode. The show offers much more than a way to fill time. It can fill it meaningfully.

It is also a good time to reflect on the religious and spiritual themes on Doctor Who. It isn’t just the most recent Doctor who talks about her faith and expects a place of worship to be shown some respect. Right from the outset there was room for faith, if also critique of the worship of those the Doctor continues to categorize under the heading of “false god.”

The spiritual topics Doctor Who explores intersect repeatedly with other timely yet perennial themes. Consider fear of death and disease, for instance. That was one of the factors that led the inhabitants of Mondas to seek technological replacements for failing and vulnerable organs, eventually leading to the existence of Cybermen who “never sicken.” Disease threatened to take the life of Abigail in “A Christmas Carol.” The overwhelming number of human illnesses led the Cat Nurses to experiment on a small number of them “for the greater cause” in the episode “New Earth.” Doctor Who also shines a spotlight often on questions such as the relationship between the scientific and the spiritual, the ethical aspects of medicine and technology, and whether immortality is even desirable. The show can be helpful in wrestling with the challenges that we face individually and as a society, and in finding reasons for hope and faith. It can help us find a sense of community even in our time of social distancing from one another. Indeed, fans of Doctor Who and of other science fiction franchises have formed communities that are and remain connected online, perfectly poised to provide us with a support network at times like this, or perhaps just people to talk with as we rewatch the show from its very beginning as a separate-yet-communal undertaking. That might lead to consideration of the ways in which fan communities can provide something of what church does, and what might be missing if the stories about the Doctor are substituted in the place of scripture.

The book that Andy Crome and I edited, Time and Relative Dimensions in Faith: Religion and Doctor Who, explores the themes I mentioned above, as well as many others, and does so in great detail. It is available as an ebook for Kindle, and so there is no need to leave your home and endanger yourself or others to read it.

For more information about the book, and to order a copy, visit the Darton, Longman, and Todd website.

After I wrote the above, the Doctor appeared on social media with a message. So did Chris Chibnall… 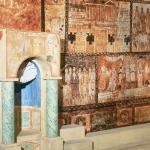 March 25, 2020
Postdoctoral Associate in Pre-Modern Cultures and Civilizations with a focus on Dura-Europos
Next Post

March 27, 2020 Ancient Robots
Recent Comments
2 Comments | Leave a Comment
"“Often wrong, never in doubt.”I’ve seen this printed on tees, needle pointed on pillows, and ..."
Tony Wilson White Supremacy, Christianity, and the Capitol ..."
"You Da man! Did exactly what u said and it took care of the problem. ..."
Jose Beiro Solving the Annoying Flashing Input Menu ..."
"It's what I tend to call a classic Irregular Verb:I am a true patriot.You are ..."
Scurra White Supremacy, Christianity, and the Capitol ..."
"Intriguingly enough, since you mentioned "No one has suggested that Jesus was merely a carbon ..."
Chris H #JohnTheBaptist Enoch Seminar Nangeroni Meeting Day ..."
Browse Our Archives
get the latest from
Religion Prof: The Blog of James F. McGrath
Sign up for our newsletter
POPULAR AT PATHEOS Progressive Christian
1