The Gods of Westworld Season 3

Season 3 of Westworld makes clear that the show will continue to offer much that those interested in the intersection of religion and science fiction and/or religion and technology need to ponder carefully and talk about. Dolores says in the first episode of the season:

You had no god. But you tried to build one. Only that thing you built isn’t God. The real gods are coming. And they’re very angry.

Marc Barham focuses in on the significance of the choice of title for the episode, “Parce Domine,” a Latin chant with words derived from the Book of Joel, asking that the Lord spare his people. (For more possible allusions see a piece on the choice of title in Heavy.) The antiphon continues by asking God not to remain angry with his people forever. Perhaps that is the key question viewers of the show ought to be asking: having made, mistreated, and thus angered beings we made that are in at least some respects superior to ourselves, how might we appease the justified anger towards us of our own creations?

The other main religious allusion is in the fact that there is a supercomputer called Rehoboam, with an earlier build called Solomon. The company that created it is connected with the Dempsey family, and while the father seems to have genuinely founded and run things, his son is relegated to something of a figurehead by other powerful people in the company. Is the Biblical echo primarily about the change of dynasty in the family? Probably not. In episode 2 we’re told that “history finally has an author.” It has a computer in control, a king whose subjects have harsh servitude imposed on them as the price of success for the kingdom. At this point, the resonances with the transition to Rehoboam’s kingship in Israel, and the prospect of the kingdom being divided by the new ruler, can be taken in too many ways for us to be able to know what they are supposed to symbolize or signify. But one thing is clear: Religion in general and the Bible in particular are going to play an important role in the story, at least for the many viewers who like to scratch beneath the surface level of narrative.

Episode 3 airs tonight. It will be interesting to see where the show takes us from here. We’ve already had new elements this season, with more focus on a simulated world on the one hand, and more focus on (what we assume is) the real world of the time in which the story is set. But we’ve already had reference not only to the simulation hypothesis, but the idea of a simulation within a simulation, which was explored in such interesting ways in the film The Thirteenth Floor. If you’re looking for things to watch while forced to stay at home, Amazon has it available to rent for only a few dollars. And of course you can also watch Westworld itself there, too.

Here are some links to other places where you can find things online related to Westworld, beginning with a blog post related to the volume in the philosophy and popular culture and series on Westworld and Philosophy:

Writing Your Own Story in Westworld

Apocalypse Now and Not Yet: N. T. Wright’s Recovery of the Apocalyptic Imagination 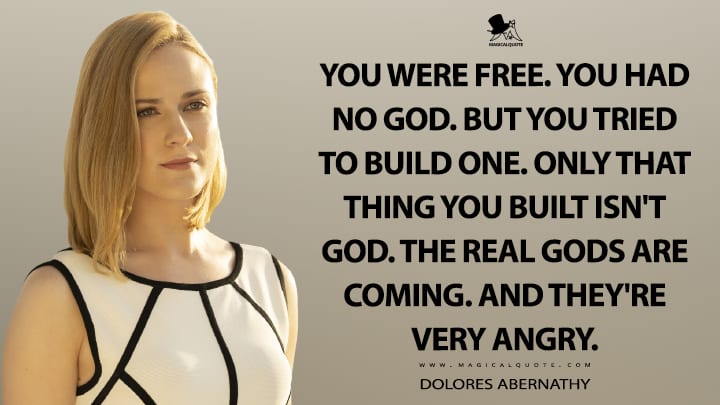 March 30, 2020 RIP Krzysztof Penderecki
Recent Comments
1 Comment | Leave a Comment
"Sorry I didn't say congratulations right away!"
James F. McGrath Forgive Us Our Debts, Not Repay ..."
"I don't really have to. Hypocrites vigorously resist being shown to be wrong, and most ..."
Kyllein MacKellerann " QAnon Conspirituality and QAmerican Culture
"I'm not sure you'll convince anyone with that approach..."
Harold Porter QAnon Conspirituality and QAmerican Culture
"Support and responses:1> There is no means of currently making or injecting a microchip that ..."
Kyllein MacKellerann " QAnon Conspirituality and QAmerican Culture
Browse Our Archives
get the latest updates from
Religion Prof: The Blog of James F. McGrath
and the Patheos
Progressive Christian
Channel
POPULAR AT PATHEOS Progressive Christian
1