The Works of the Flesh are Obvious (Unless They are Theological)

Paul’s discussion of the works of the flesh and the fruit of the Spirit in his letter to the Galatians was pretty important in my trajectory as an interpreter of the New Testament epistles of Paul. I remember reading his lengthy discussion of salvation not being by works, only to arrive at his list of works of the flesh and to find myself baffled by his statement that those who do such things will not inherit the kingdom of God.

This conundrum sat in the back of my mind, niggling away, until I read Dunn’s discussion of the works of the Law in Paul, which finally allowed me to understand Paul as something other than simply self-contradictory.

The Reformation’s concern with salvation as “not through works” didn’t just relativize the importance of good works. It also downplays the significance of bad ones. Of course, some Protestants are liable to nonetheless harp on about particular things that they feel they can claim characterize the world but not Christians. However, those of us who know Protestant churches well from the inside will recognize certain “works of the flesh” as also characteristics of Christian communities, in particular dissention, factions, strife, and quarrels. These are sometimes treated as unimportant matters when they simply focus on the color of the carpet or music styles. Even then they tend to be tolerated. But when one is dissentious and prone to quarrel about theology, sometimes these works of the flesh are treated as though they were spiritual gifts. Paul doesn’t say, however, that theological strife and factions are an exception to his statement.

A friend of mine shared a quote from Gavin Ortlund, Finding the Right Hills to Die On. He writes, “There’s an old saying (I can’t remember where I heard it): ‘There is no doctrine a fundamentalist won’t fight over, and no doctrine a liberal will fight over.’ Strictly speaking, that’s not quite fair to thoughtful liberals and fundamentalists. But we can probably recognize these two instincts. Most of us have a tendency in one direction or the other—to fight over doctrine too much or too little. This book is about finding the happy place between these two extremes—the place of wisdom, love, and courage that will best serve the church and advance the gospel in our fractured times. In other words, it’s about finding the right hills to die on.”

Ironically my friend who shared that believes the hill worth dying on is biblical inerrancy, which in my view is tantamount to idolatry. What for him is one of the doctrines worth fighting for, from my perspective seems a dangerous and sinful teaching that ought to be sharply criticized rather than defended from criticism.

As I’ve often said, most Christians agree with the famous saying, which they might even misattribute to an authoritative source in their own tradition such as Augustine or Wesley:  “in essentials unity, in non-essentials liberty, and in all things charity.” Apparently it actually comes from Marco Antonio de Dominis, an archbishop who was condemned as a heretic and who seems to have been advocating liberty on some matters that others considered essential. That’s the irony of the saying: most Christians and most human beings agree with it, but because we don’t agree on which things are essential, it doesn’t prevent controversy.

Paul presumably followed some version of the principle, since he spoke of factions and quarrels as works of the flesh…in a letter that describes his quarrel with Peter in Antioch!

I’ve talked before about the challenge of maintaining a sense of shared identity and principles while practicing diversity and inclusivity. A Sunday school discussion helped me think through the topic, as I realized that we can actually understand ourselves to be precisely a people committed to following Jesus and worshipping God together, enriched by our differences and learning from those who disagree with us. We can have a shared central commitment which relativizes the importance of everything else.

But of course, as has already been said, not everyone will agree with this decision about what is essential and provides our unity, and what are matters in which liberty should be the rule. Yet if we can get the last bit about charity (sometimes translated as “love”) in all things right, maybe, just maybe, we can do a better job when it comes to the things we consider essentials too.

Perhaps I will return to this topic on a future occasion and approach it from another angle that I think could be instructive. What answer would emerge if we asked and investigated the question of what hill Jesus chose to die on (metaphorically speaking, of course)?

Steve Wiggins blogged about a book on Abraham as a potential source of unity or conflict between Jews, Christians, and Muslims. He writes, “Much of the violence between faiths comes down to conflicting claims of ownership.  As the book makes clear, if people resolve to celebrate difference rather than to distrust the other we can all live together in peace.  The only thing lacking to make this happen is the will.  Unfortunately, the conflict draws its energy from religious beliefs, or, more precisely, politics using religion to get its ends.  And for that one doesn’t have to travel all the way to the Middle East.”

Knowing which dragons to poke is a similar idea to knowing which hill to die on, and it is mentioned in this quote from N. T. Wright: 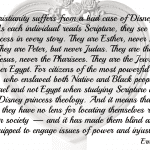 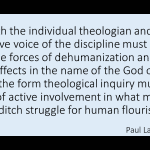 June 23, 2020 Spiritual Resistance
Recent Comments
0 | Leave a Comment
"That's an interesting alternative. Personally, I have even more problem with the idea that only ..."
James F. McGrath Understanding Whiteness
"Thanks for sharing these resources! Resmaa Menakem talks about "people of culture" which feels helpful ..."
Lyndsey Understanding Whiteness
"‪Jacqueline Hill is so brilliant in this. Lexa could have been just an evil priestess ..."
Nathan Doctor Who: Meglos
"Who is this assumed "we" judged as "one" by those who benefit by the by ..."
Rafi Simonton Understanding Whiteness
Browse Our Archives
Follow Us!