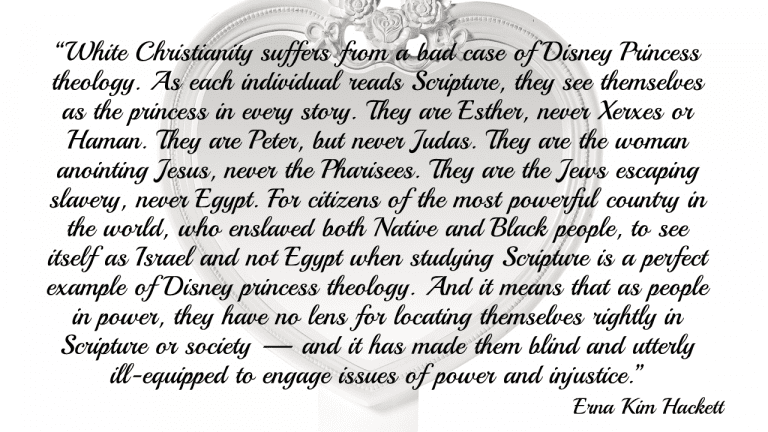 I shared a version of the quote above on Facebook and the response and discussion was fascinating. I realize it is Father’s Day, but I will say that I am perfectly comfortable as a male and as a father to talk about how I and how North American white Christianity might be like Disney princesses. It will be no stranger than the fact that, unplanned as far as the coincidence with the holiday is concerned, my Sunday school class will be talking about Mary the mother of Jesus later today. Maybe we can start with “where was Joseph?”

But here I’d like to focus on the discussion the quote prompted. I definitely recommend reading the entirety of the blog post from which the quote is taken. In response to one question on Facebook about the meme, I said that I think the analogy works in the sense that we always tend to identify with the hero rather than the villain when watching Disney movies and when reading the Bible.

One commenter from Romania asked about the quote, and I explained it in this way: The problem is about assuming we are the hero and never the villain in our cherished stories. We assume we are the persecuted church in Revelation not the Roman Empire. It works with Star Wars too: we identify ourselves as Leia not Palpatine.

When he further asked whether it unhelpfully demonized “white Christianity” I wrote this in response:

I am sure that some of the conversation related to the United States is puzzling from the vantage point of Romania. On the other hand, the Southern Baptists, which broke away from the national union of American Baptist Churches because those in the south defended slavery, has had a significant influence in Romania, although not always with Romanians being aware that that denomination’s outlook including its doctrine about the Bible were formed precisely to defend slavery and depict abolitionism as an attack on scripture. Either way, I don’t think there is an issue here of “demonization” any more than there is an issue of the (much more literal) “demonization” of the Roman Empire in the Book of Revelation. Revelation 18:13 specifically mentions the enrichment of Rome at the expense of others through trade that included slavery as part of that broader imperial economic endeavor. If Rome had said first “fine, we’ll get rid of slavery but keep you as second-class separate and unequal inhabitants,” then next “fine, we’ll let you go to the same schools as Romans but discriminate against you for jobs and housing,” and most recently “fine, we’ll make you equal in every respect on paper in the eyes of the law as long as you don’t complain about the ongoing legacy of all that was done previously, or call us on the fact that our soldiers kill innocent people in your communities much more frequently than they do others,” would it be “demonization” if an heir to the author of the Book of Revelation suggested that the Roman Empire still had an unresolved issue that called for repentance and meaningful change?

The issue of racism came up more than once, including when a friend shared the following statement made on Facebook (because he was as appalled as I hope most readers of this blog will be): 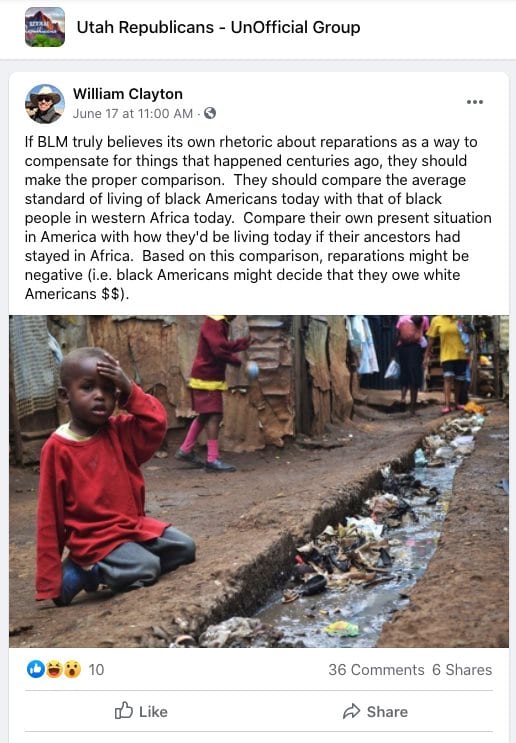 In talking about how to respond to something like that, I added to other things that had been said and wrote the following: The response should also focus on how the current poverty in so much of Africa is due to the pillaging of the continent by colonial powers, the same powers that claimed North America and imported slaves as part of that same endeavor of conquest for personal enrichment.

There is more that could be said, but for now let me just end by reiterating my recommendation to read the entirety of Erna Kim Hackett’s blog post, and also providing some additional related links below…

Reading Reading While Black While White

A Tale of Many Statues

“White Blessing” and the Christianization of Enslaved Africans

How an Open Bible Should Dismantle White Supremacy

From Accra to Harlem and Back: Black Histories Matter 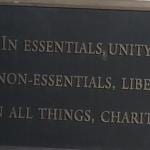 June 22, 2020 The Works of the Flesh are Obvious (Unless They are Theological)
Recent Comments
0 | Leave a Comment
"I'm not sure I understood your meaning. By "top down" you mean top of the ..."
James F. McGrath The Global Faith And Media Study: ..."
"So top down control to channel the flow of a specific narrative is what this ..."
sneaker2015 The Global Faith And Media Study: ..."
"Now to get certain Christian sects to practice this.... not holding my breath."
Kyllein MacKellerann Universal Declaration of Human Rights by ..."
"Plagiarism has been around a long long time"
Bob Jonah and the Ancient Aliens’ Submarine
Browse Our Archives
Related posts from Religion Prof: The Blog of James F. McGrath