The Last Day is here. Oh, sorry, I mean the last day is here. The Last Day may be a future Enoch Seminar conference, but this is the final day of the 2020 online one on Evil. The recap session started off with Archie Wright highlighting terminology and insider vs. outsider language as particularly important. The super-human element in some systems of thought when it comes to evil, and the names used, are noteworthy. Belial comes up a lot, and yet even so should not be assumed to be “the same” even if the same name is used (as Loren Stuckenbruck emphasizes in one of his books). Possible future topics for Enoch Seminars that were proposed include the Book of Revelation; Revelation and Inspiration; Philo of Alexandria and the Jewish Diaspora; Haggadic Literature; Christology and Angelology; Gnostic Literature; Church Fathers; Samaritans; and many others. Gabriele Boccaccini highlighted the interest in evil in the Enochic literature that is shared with New Testament literature, which came up in one of the early Enoch Seminar meetings. There is a need for a parallel discussion of the righteous when discussing evil and sin. The relationship between focus on eschatology and hope for a final solution to evil, and present everyday life in the here and now, is also something that connects them. Benjamin Reynolds mentioned how rich the discussion in the Chat on Zoom was. Unfortunately it is hard if not impossible to keep up with that while also chairing a session or presenting). He highlighted Paula Fredriksen’s points about Christology and how it requires evil enemies as part of its framework, and Adele Reinhartz’s proposal that the Gospel of John is more interested in cosmological evil than moral evil. Her point, that John saw Satan entering Judas as the moment the cosmological story and the historical intersect, and the act of seeing cosmological evil in the mundane, was particularly striking and thought-provoking. Lorenzo DiTomasso highlighted the plan to assemble a conference volume. He then noted the ways we use worldview in talking about these ancient authors, and the trajectory towards increased interest in metaphysical evil over time. The social function of evil in groups’ self-definition, and real and potential enemies of the group both within and outside, are important in understanding apocalypticism and other worldviews. I was happy to see Edmondo Lupieri suggest that a whole conference on Mandaeism would be useful and appropriate! Larry Schiffman says (by way of a joke) that the earliest person said to be named in conjunction with his circumcision ceremony is John the Baptist, and the earliest person said to be called to read the prophets in the synagogue is Jesus. But the serious point is that Christian sources are important for the study of Judaism. Christianity is an example of a form of Judaism that was willing to promote particular beings (both good and evil) to large-scale roles and statuses. John Collins noted the decline in attention to John’s Gospel’s relationship to the two spirits idea. We are too inclined to connect it with Qumran specifically, whereas Collins thinks he could have gotten it from elsewhere. Adele Reinhartz said there is still discussion of this, but less in connection with direct borrowing from one source or other group. But when it comes to imagery such as light and darkness, this can be derived from nature independently, being part of everyone’s life to an even greater extent before electric lighting came into the picture. Deborah Forger raised the question of how concepts of divinity relate to a group’s thinking about evil. She mentioned divinity existing on a gradation, with Jews distinguished from others by sacrifice, mentioning my work (see The Only True God). Miryam Brand highlighted the importance of thinking about how documents are grouped together, and how we can best prepare to study them without erasing differences between them.

In the recap session, we agreed that this event exceeded all expectations. Lorenzo DiTomasso got things started with a focus on our limited vocabulary and the diverse service to which terms (e.g. “devil”) are put. The way cosmological and protological matters related to evil are treated have present-day, real world consequences. If the creation itself is inherently flawed, we approach life differently than if creation is good but being twisted. Depicting female figures in particular roles in the process has consequences. Miryam Brand emphasized how we speak of “evil” even when we are talking about different things. The same can be said about “apocalyptic”: is it a genre, a worldview, both, other things as well? Brand mentioned Baumgarten’s willingness to say that it is ridiculous how some presumed that there would be an eschatological resolution which would be in their favor. Celsus and the Rabbis confront these topics but do not have the same groups as their primary focus. She emphasized the distinction between “lumpers” and “splitters” among academics, and asked whether we can find a way to preserve the important contribution of both. Kelley Coblentz Bautch dug into some of the specific contributions of specific academics over these days, showing impressive recollection and/or notetaking in the details she mentioned with very precise recognition of those who contributed the points in question. John Collins followed Bautch’s summary with questions, noting to begin with the variety of things people consider “evil.” He also asked whether there was something in the Hellenistic era that changed people’s perception of the world. Ben Sira and apocalyptic works express interest in evil and its source, and so this is a broader interest in that era. We could use a few more Classicists in this group. Gabriele Boccaccini said that we may need to talk about the “origin of the origin of evil,” in other words, when interest in this topic comes to the fore. Apocalypticism does not espouse a single unified view of the origin of evil. He noted the way his students who are Christians and Jews either do or do not read the “Devil” into the story about the Garden of Eden in Genesis. Larry Schiffman made a joke about how good the food was during the conference. Mine was delicious, too, but hopefully everyone reading this is aware that we held the conference via Zoom and so were not eating meals together. More seriously, he emphasized the important contribution of this conference and of the Enoch Seminar makes in providing perspectives from other fields besides our own. We cannot explain the phenomena we study on our own because the ancient world is complex in ways that go beyond our specific areas of expertise. On the other hand, there are data about the ancient social context that we cannot know, as they go beyond the evidence provided by texts and other artifacts that have come down to us. We should not create churches out of Gospels, or J, E, P, and D communities. He suspects that views of evil probably crossed lines in ways that not every subject did. He drew comparisons between ancient and modern people with respect to wondering whom to blame in the case of a particular disaster: is it the military’s failure to build a dam wall, global warming, or something else? The ancients had similar disagreements. Daniel Boyarin challenged me on continuing to use “Gnosticism” as a term that many find problematic. He went on to challenge the ways we use “second-temple Judaism,” “apocalyptic,” and many other terms. I suspect that we all agree to at least some extent. The inability to agree on terminology, including even “religion,” cannot be allowed to keep us from speaking, but we do need to wrestle with these things constantly. In my own case, Mandaeism makes reference to the lightworld revealer Manda d-Hayye, whose name is usually understood to denote “Knowledge of Life,” and so in the case of Mandaeism at least “Gnosticism” seems as though it wouldn’t be inappropriate. On the other hand, “Mandaean” is itself a term that isn’t consistently used as a self-designation by the group that we apply it to. Karen King asked why it is that we focused this conference on “evil.” Sure, the ancient texts are interested in it, but there is more to it than that. How do their perspectives contribute to broader conversations in the contemporary world about evil? Giovanni Bazzana noted the lack of representation in the conference of those who work on what we might call “magic,” which wrestles with the practical challenges of evil. Many mentioned it, yet there weren’t participants or papers focused on that. Lester Grabbe mentioned how many important things happened in the Persian period, which is sometimes neglected in favor of focus on the Hellenistic age. Grabbe thinks the fallen angel tradition may precede Genesis 6 and the Persian period rather than being a result from Genesis. He mentioned an article by Birger Pearson from the 1980s arguing that Gnosticism originated within a Jewish context. Edmondo Lupieri emphasized how reality resists our taxonomies and refuses to fit our boxes. He thinks there were non-Christian forms of Gnosticism, and encouraged the Enoch Seminar to focus attention on the question. John Kampen encouraged us to talk about social and political contexts as much as we talk about literary contexts. Albert Baumgarten sought to answer Karen King’s question by highlighting that evil is part of our ongoing experience, even though our mythological framework is different, and that attracts us to the topic. For him, the most important part of participation is the chance to meet, be enriched by, and learn from young scholars, as someone now a decade into retirement. Encouraging the next generation to work in these areas and on these topics is an important part of what the Enoch Seminar does.

Gabriele Boccaccini rounded things off with the sobering thought that going forward things will never be the same again as they once were. We have experienced how rich an online conference can be and how it gives a greater number of participants access. We will not simply go back to the way we traditionally did things. We ended with many words of thanks and expressions of appreciation. As hopefully you can tell from my blog posts even if you didn’t participate, this was a truly wonderful and rewarding conference, everything one hopes an academic conference will be and much more. I hope if you’ve read my recaps/reports about it you’ve found them helpful and interesting. And if you attended the conference and we’re not already connected, or if you are a fellow academic at whatever stage in your career who works on things that you can tell I’m also interested in, please do get in touch. Another great thing about the internet is that it doesn’t only make conferences possible, but allows us to share our perspectives and knowledge more easily in between conferences as well. 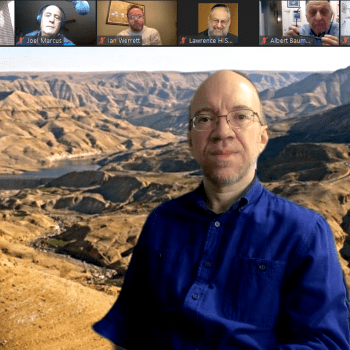